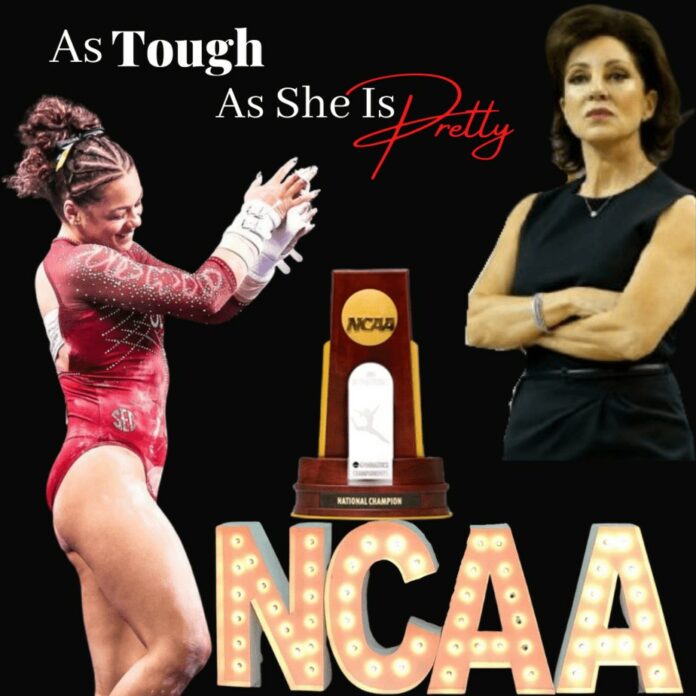 Sooners stole the show,13 alums competed and 1 killed it in vault in warm-ups, the cables at bars were faulty and so were the judges, landings on vault were hard to come by but not for Rucker, Bars and Beam All Americans for Region 5 Alums, do you focus recruiting on elites or level 10s and Lights Out needs to be OUT for ever.

Jacey Vore– Struggles on bars but bounces back on beam (after Nioami fell) to post a 9.8125.

Aria Brusch-  Consistent on all three of her events both days of competition.

KJC mentioned her smile was choreographed into her routine, NO WAY

Helen Hu- Beautiful Piked Ray to pak (huge swing and amplitude on both skills) beam solid as always with her lines and flow solid front aerials 9.9375 to tie pretty much everyone for 4th place (8 tied)

Kim was happy- Mati Waligora did floor at NCAA’s replacing Griffin James after the warm-ups.

Makarri Doggette- Several hand claps after this routine. Awesome DL on her one foot.

Tara Walsh- Stuck a beautiful Yurchenko full in the warm-ups (auburn alternate on vault) not bad for landing locked legged on a 1 ½ a few weeks ago.

Week 1: From A to Z and Everything in Between