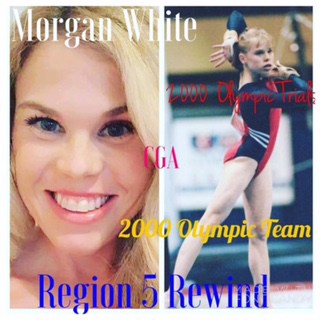 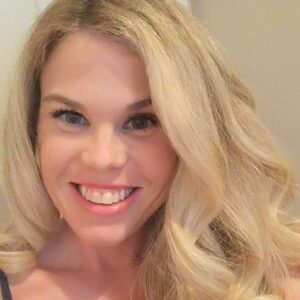 Our next Region 5 athlete who chased her dreams all the way to the Olympic Trials also hails from Cincinnati Gymnastics Academy in Fairfield, Ohio. Morgan White, who was born in West Bend Wisconsin, competed her entire gymnastics life under Mary Lee Tracy at CGA, Morgan had the opportunity to watch Amanda Borden and Jaycie Phelps train for the 1996

Olympics Games. Morgan [nicknamed “The Quiet Storm”], was a quite competitor, which allowed her gymnastics to speak for itself on the competition floor. Mary Lee used to call her “the Creeper” because according to Tim Daggitt “she doesn’t knock your socks off, she gets a little better day by day” (NBC Broadcast 1999 Nationals).  Morgan White was an inspiration to me growing up, I used her 1999 Floor Exercise music as my first optional music in the fall of 1999, “My Drag” by Squirrel Nut Zipper.

Morgan White became an international elite in 1996, it wasn’t until 1998 that she began to find success at the elite level. In 1998 Morgan picked up a number of gold medals in National and International competitions, placing 1st on the Uneven Bars at the American Classic, 1st AA, 2nd on Uneven Bars, 1st on the Balance beam and 2nd on the Floor at the U.S. Classic meet. At the 1998 U.S Championships Morgan picked up 3 National Titles in the Junior Division (AA, Bars and Floor), she also placed 2nd on the Balance Beam. Also as a Junior Morgan racked up many international honors placing 2nd on bars and 2nd place team at the 1997 Pan

Morgan became a Senior competitor in 1999, which would now allow her the opportunity to compete internationally at the World

Championships and the Olympic Games.  In 1999 Morgan has a breakout senior debut [internationally] placing 1st with the team at the China Dual meet, 1st AA and 3rd on bars at the 1999 Pan American Games. Morgan went onto to qualify to the 1999 World Championships Team where the USA placed 6th as a team. [Nationally] Morgan was successful as well placing 2nd on Floor at the American Classic, 7th AA, 3rd on bars and 6th on beam at the US Championships, which qualified her to the World Team Trials. In 1999 Morgan also competed at the American Cup.

and a few weeks later she competed at the U.S Championships placing 7th AA, 5th on Bars, 4th on Beam and 5th on Floor not to bad for a young gymnast battling the flu during the competition. Her 7th place AA finish qualified her onto the 2000 US Olympic Team Trials.

Morgan had a great showing at the 2000 US Olympic Trials, she finished 4th place in the AA behind  two national champions and a 1996 Olympian. However, just because she finished in the top 6 did not guarantee her a spot on the Sydney Team. She like her teammate Alyssa Beckerman did all they could  that day and they too waited in the back room on live tv for what seemed like an eternity to find out if her name would be one of the 6 names called as part of the 2000 US Olympic Team.

This is what Morgan has to say at the conclusion of the Trials: 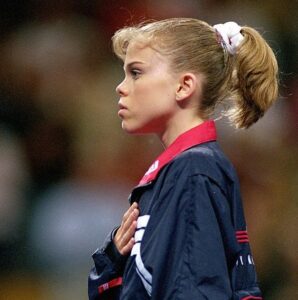 “I did above and beyond what I thought I was going to do. Today everything was just clicking, everything felt so good for me…it was fun and it is a great feeling. There are so many great athletes out there and I’m not the top gymnast in the U.S…I’m still peaking.”—Morgan White 2000 Olympic Team Trials.

Once the selection committee was done deliberating, it was announced that Morgan White from CGA in Ohio would be part of the 2000 US Olympic Team to compete in Sydney. However, bad luck struck Morgan after arriving in Sydney, she sustained a broken ankle during training and was forced to withdraw from the team. Morgan and her coach Mary Lee Tracy, who had been named one of the Olympic Team coaches left Sydney for Ohio. Morgans Olympic Dream ended before the games even started, however according to USA Gymnastics Morgan is still considered an Olympian even though she was unable to compete.

After the Olympics Morgan tried to continue gymnastics into 2001 with hopes of making the 2001 World Championship Team, however she had some struggles at the 2001 Nationals and did not make the team, Morgan suffered a shoulder injury in 2001 and ultimately made the decision in 2002 to retire from Gymnastics.

Morgan attended Miami University in Ohio where she studied special education, she lives in Fairfield Ohio and is an intervention specialist at Winton Woods Elementary School. Morgan is still involved with Gymnastics working with the USA Gymnastics Grassroots program and she attends and coaches at summer camps like Woodward. 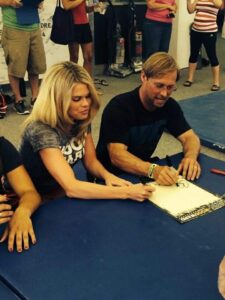 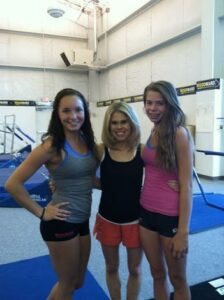 Thank You to Morgan White for being such and inspiration to future generations of Region 5 Elite and Region 5 Olympic Hopefuls. Continue to succeed and inspire in everything you do in life.