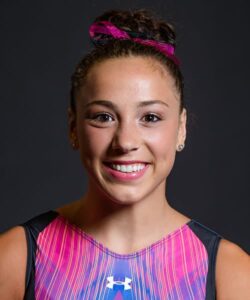 Our last and most recent Region 5 Elite to chase Olympic Glory is Amelia Hundley of Hamilton, Ohio. Amelia started tumbling

classes at the age of 4, her mother owned a dance studio in the Cincinnati area. By the age of 7 Amelia had begun competing in Gymnastics at CGA, Amelia progressed through the Levels quite quickly and by 2008 she was already competing as a Level 10. Amelia found much success on the JO level winning Uneven Bars at the 2008 Ohio State Championships and placing 2nd in the All-Around. She went onto compete at the Region 5 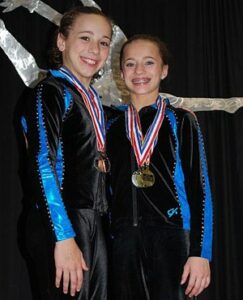 2010 was Amelia’s second season competing Elite, Amelia qualified for the 2010 Nastia Liukin Cup.  At the Nastia Liukin Cup, Amelia placed 3rd on Floor and 11th in the AA. Amelia also competed at the CoverGirl Classic placing 13th in the all-around qualifying on to the VISA Championships in Hartford, CT, where she placed 19th in the AA and 16th on Uneven Bars 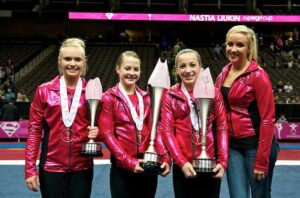 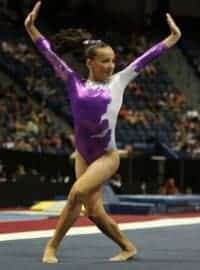 earned great results at every meet she competed in. However, with 2012 approaching Amelia would have to watch and wait as the 2012 US Olympic Team was chosen, she would still be a Junior in the Olympic Year.

For the next two years Amelia would compete nationally & internationally representing the USA all over the world. In 2012, she found great results at the Secret Classic, placing 2nd on the Beam, 4th on the Floor and 3rd in the AA, Vault and Bars, and the Visa Championships, placing 3rd on the Bars, 4th on the Beam, 5th in the Vault & Floor and 6th in the AA earning herself a spot on her second Junior National Team. In 2012 Meels also competing in two international competitions the Kellogg’s Pacific Rim 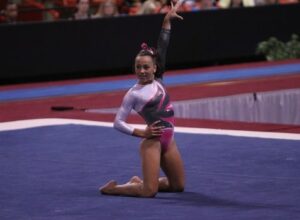 Championships, placing 1st with the Team, 2nd on the Vault and the Floor and the City of Jesolo Trophy in Italy where she also was on the 1st placing winning team and individually placed 3rd on the Vault, 4th on the Bars and 7th on the Balance Beam as well as the AA. Amelia was again having a stellar Junior Elite season, proving herself to Marta that she could someday be a contender at the Senior Level.

2013 would be Amelia’s last year as a Junior Level Elite, she went into the Elite season confident and ready to compete. She started out her last Junior season with two 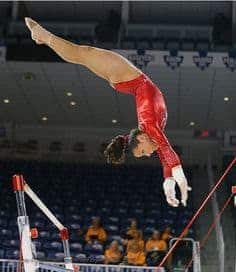 international assignments, competing at the City of Jesolo Trophy, placing 3rd in the AA & Balance Beam as well as 6th on the Uneven Bar and Floor. While in Europe Team USA competed in Germany at a Tri-Meet against Germany & Romania again yielding good results. Amelia closed out her last Junior season competing again  at the Secret Classic in Chicago Illinois, having her best AA finish to date, she was 2nd in the AA & on the Bars, 3rd on the Floor and 5th on the Vault as well as the Beam, she would qualify onto the P&G 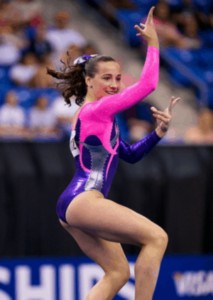 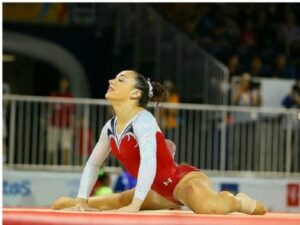 in the Team event. Amelia was two years away from the Olympic Year, but was heading in a great direction. For Amelia 2015 started out with the Pan American Games in Toronto Canada, where she placed 1st with the team, 2nd on the Floor, 3rd on the Bars and 4th AA, she was looking great and primed to have an incredible season heading towards championships and worlds selection. However, Meels only competed day one at the P&G Championships she slightly tore her meniscus on her first tumbling pass on floor, which was her first event. She continued the first day of competition and by the end of day one, she was in 9th place. Unfortunately, she  withdrew for day two due to the injury she sustained on floor exercise. Despite her injury, she was named to the Senior National Team and was then invited to 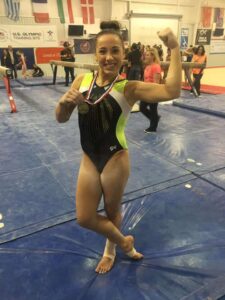 the 2015 Worlds Selection Camp to be held at the Ranch in September. Amelia did not make the 2015 World Championships Team, however she would go on to compete in the 2016 World Cup in Stuttgart Germany, where she finished 3rd in the AA. 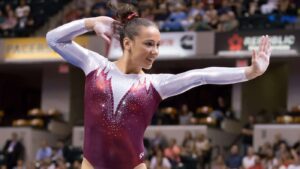 Amelia headed towards Olympic Trials, she first competed at the Secret Classic placing 3rd on Vault and 6th on Uneven Bars. She then competed at the P&G Championships placing 6th in the AA and 7th on Uneven Bars, she qualified to her 3rd Senior National Team and onto the 2016 US Olympic Team Trials. Heading into the Olympic Trials many wondered if Amelia could contribute to the Olympic Team and where she could contribute. Amelia 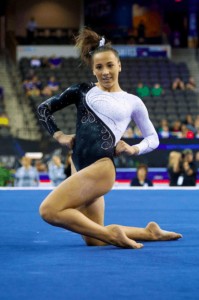 being one of the most consistent competitors could certainly contribute to Team USA. In deciding who will make an Olympic Team, having that consistent athlete is key, someone who can step in anywhere and nail a great routine. I personally thought that Amelia had what it took to be an Olympic
Alternate and because of how consistent she has been not just in 2016 but throughout her entire career I thought she would earn one of these spots. At the trials Amelia proved her consistency once again by placing 7th on the Vault, 8th on the Bars and 9th AA. However, this was not enough to earn 1 of 8 spots that would be awarded that night. 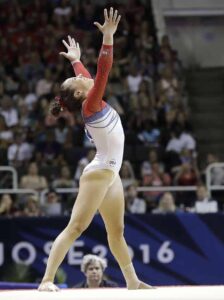 Amelia certainly did not feel bad for herself in not making the team, she had the best meet of her entire life. Unfortunately, many of us were not able to view her routines, because NBC had virtually zero coverage of the athletes that were not in contention. It was a shame that people could not witness this athlete competing in one of the biggest meets of her life and nailing it!

Amelia,who was homeschooled for most of her career, accepted a full scholarship to compete for the University of Florida. Meels will join the Gator Gymnastics Team this fall as she embarks on the next chapter of her life, becoming a student-athlete at one of the best Universities in the United States. 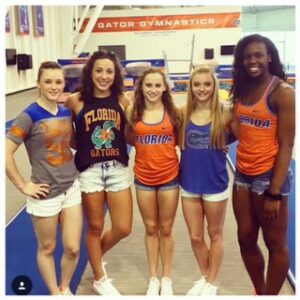 Amelia has always been a fan favorite, especially in Region 5, we have been following her journey to the 2016 Olympic Trials for a very long time. Region 5 Insider has posted many articles, videos and pictures of Amelia’s journey including interviews with Amelia. To learn about some of Amelia’s favorite things Click Here.

Amelia has always had a strong relationship with her long time coach Mary Lee Tracy, I recently spoke with Mary Lee and she shared some great things about Amelia and their journey together.

“The journey with Amelia and her family has been an enjoyable experience! Amelia has been at Cincinnati Gymnastics since she was 3, over 15 years! There have been many highs and lows especially as an elite. For the past 6 years Amelia has been a USA National Team Member and represented our country many times internationally.

As Amelia came upon her senior year, I gave her the option to train level 10 or continue on the elite path. Her decision was to stay on the elite track and the goal was to make Olympic Trials so that is what we focused on.

The final stretch of her elite career with me was the very best part! For the last 6 months with the goal so clear for both of us, our relationship remained so clean. We were beginning to transition into our next phase of life which

What I will miss the most is her smile, her leadership and her coachablity. Amelia has been such a strong leader to all levels of athletes at CGA! I miss her already!”—Mary Lee Tracy August 2016 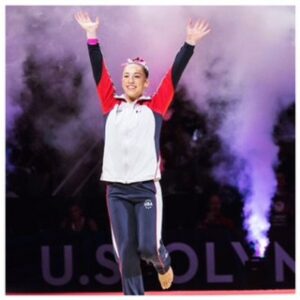 I would like to congratulate Amelia on all of her success thus far, I am looking forward to watching her perform as a collegiate student-athlete. I believe that Amelia will find great success at the collegiate level. I am beyond positive that Meels can do and succeed at what she puts her mind too. Her best gymnastics might be yet to come. I would like to also thank Amelia for being such a positive and inspirational role model for not only the young athletes of Region 5, but for all athletes in the gymnastics community.

Here are a few of my favorite Amelia Pictures: 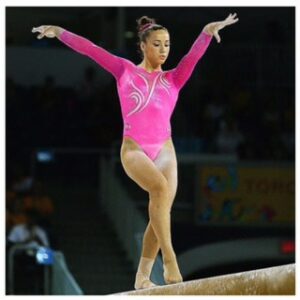 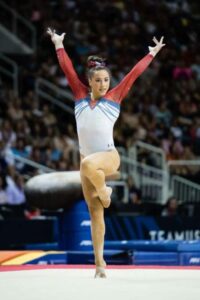 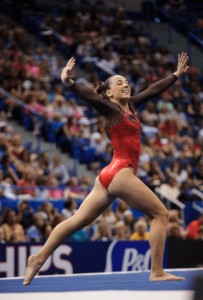 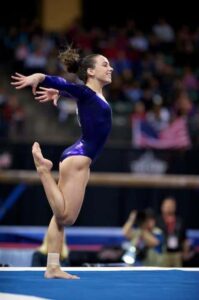 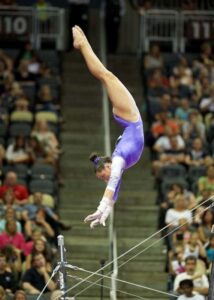 Here are Amelia’s Routines from 2016: