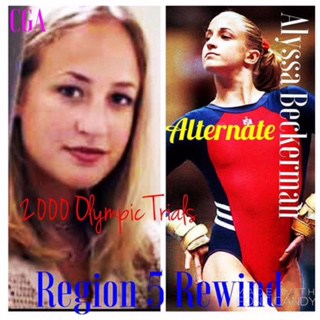 Our next Region 5 gymnast who has helped pave the way for the next generation to the Olympic Trials was not originally from Region 5, but she did compete all of her elite career in Region 5 at Cincinnati Gymnastics Academy in Ohio.

Alyssa Beckerman, originally from New Jersey, trained under Mary Lee Tracy at CGA in Fairfield, Ohio. Alyssa was a strong competitor with beautiful lines. I really enjoyed watching her on Beam and Floor.

Alyssa became an international elite in 1996, but it wasn’t until 1998 that she really hit her stride and started to find success on the national level. At the 1998 U.S Championships Alyssa placed 2nd on bars and 8th AA. Alyssa had a stellar year in 1999, she was 3rd AA at the American Classic/Pan Am Trials, she also added a 2nd place AA and picked up two national titles on Beam and Vault to her resume at the 1999 John Hancock U.S Championships. Alyssa also placed 3rd at the 1999 World Championship Trials, however Alyssa was unable to compete at the Worlds due to a wrist injury. She would get another shot to prove her readiness to the Olympic Selection Committee, mainly Bela Karolyi who was the National Team Coordinator, that she would be an asset to the 2000 Sydney Olympic Team.

At the 2000 John Hancock U.S Championships, this was Alyssa’s time to shine, she was 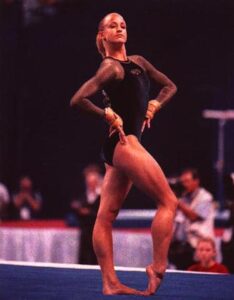 coming off a great showing at the U.S Classic meet placing 3rd in the AA a few weeks before. At the Championships Alyssa placed 5th in the AA, 2nd on the uneven bars and 1st on the balance beam. Beckerman also secured herself a spot at the 2000 U.S Olympic Team Trials.

At the 2000 U.S Olympic Team Trials Alyssa had a pretty good meet, she struggled a bit on bars in day 1 and stepping out on floor on day 2, but she ended up finishing 8th in the All-Around. I remember watching these trials and thinking that she was going to make the team, especially because others had either made mistakes or sustained injuries. However, Alyssa along with all the other competitors sat in a room in the back of the arena while the selection committee deliberated for 30mins on live tv before coming out and announcing the girls who made the team, those who were selected as alternates and those whose olympic dreams would be put on hold for another 4 years.

Alyssa’s name was not called as a member of the Olympic Team, however she was named the 1st alternate to the team, which meant she would travel to Sydney and be one standby just in case she was needed. A few days into the Games, Alyssa’s club mate Morgan White broke her ankle and would not be able to compete, so she headed home. Alyssa thought this would be her time, that she would get 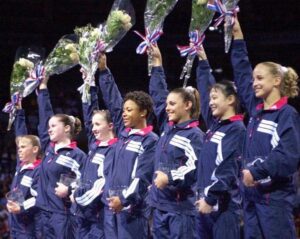 called up to the team. This was not the case, Bela had called up the 2nd alternate who was not even in Sydney at the time to compete on the team. Alyssa had to sit in the stands and cheer for the USA Team as they competed in the team finals without her.

After earning the Alternate spot on the Olympic Team Alyssa had this to say:

“At this point I’m thankful for what I’ve got. I’ve been working my butt off for so long now. I’ve been to every training camp working hard. I’m honored Bela really believes in me.”—Alyssa Beckerman 2000 Olympic Trials

Even though Alyssa’s Olympic Journey did not go as planned or as those Region 5 and CGA athletes before her, she was still part of the Olympic Team and the Olympic Games in 2000. After the Games ended Alyssa went
on to receive a full ride scholarship to UCLA, along with 2 of her Olympic Teammates, she competed for UCLA from 2001-2003. Alyssa earned a degree in Sociology from UCLA.

On June 22, 2014 Alyssa married Matt King in a ceremony in Westboro, NJ. They now reside in Middletown, NJ.

Thank You Alyssa Beckerman for being such a strong willed competitor and for continuing to strive towards your dreams. You have been an inspiration for the next generation of Region 5 Elites and Region 5 Olympic Hopefuls. I hope you continue to succeed and inspire in your life.

Here are Alyssa’s routines from the 2000 Olympic Trials