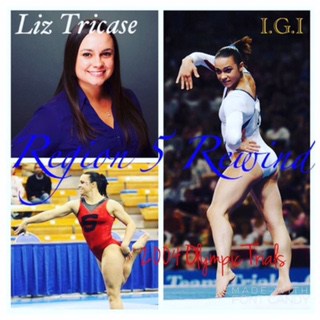 Our next Region 5 Athlete who helped pave the way for future generations of Region 5 Elites and Olympic Hopefuls, comes to us from IGI in Elmhurst, Illinois. Elizabeth “Liz” Tricase was born and raised in Itasca, Illinios, where she trained her entire gymnastics career under Todd Gardiner at Illinois Gymnastics Institute (IGI).

Liz started gymnastics in 1989, she rose through the JO ranks becoming the 2000 JO National All-Around Champion, the next year she became in International Elite. Liz spent 3 years on the US National Team (2001-2004), achieving much success on her way to the 2004 Olympic Trials.

In 2001 Liz was a Junior International Elite, she competed in the

US Championships placing 10th in the AA, 3rd on Vault, 6th on Beam and 7th on Bars. In 2002 Liz entered the Senior ranks and had a successful year. She competed at the American Classic placing 4th AA, 2nd Vault, 4th on Bars and 6th in the Floor; She also had a great showing at the US Classic and the US Championships placing 5th in the AA, 5th on Bars, 4th on Floor and 1st on Vault becoming the 2002 National Vault Champion. Her placements at the US Championships helped secure her a place on the Spring Cup competition in Ontario, Canada (1st Team, 2nd AA, 1st on Vault, 1st on Floor, 4th on Beam and Bars) and the alternate spot on the Pacific Alliance Championships.

Liz qualified to the 2004 US Olympic Team Trials. Heading into trials Liz looked prime to secure a spot on the team, Team USA could have used her on the Vault and the Floor. She was a strong competitor on both events showing great

routines and difficulty. During the Trials Shannon Miller commented to the Chicago Tribune that “Liz would make a great team captain for Team USA in Athens” 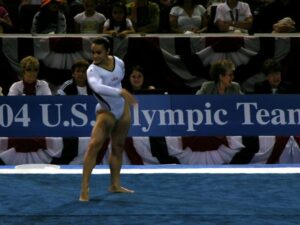 Liz had a great Olympic Trials, hitting her routines especially her Vault and Floor. Liz placed 10th in the AA at the Trials earning herself a spot at the 2004 Olympic Selection Camp to be held after the Trials at the Ranch. Liz did not make the 2004 Olympic Team, but she did earn a Full Ride Gymnastics Scholarship to Stanford. During her career with USA Gymnastics Liz was named the Sportswoman of the Year 3 times  in a row (2002,2003,2004).

After the Olympics, in the Fall of 2004 Liz begin her journey with the Stanford Gymnastics Team. Liz had a successful collegiate gymnastics career, earning first-team All-American in vault (2007) and uneven bars (2008). Liz was a three-time Pac-10 bars champion (2006-08). She also once scored a perfect 10.0 on the uneven bars, she also went onto finished

seventh in the Bars at the 2007 NCAA Championships. Liz also served as co-captain for Stanford’s Super Six team in 2007 and 2008. She also earned the honor of being the team’s 2008 Gymnast of the Year. After her 2008 graduation, Liz became a graduate assistant coach at Stanford.

In 2009 Liz finished her Masters Degree at Stanford in Communications. She began working for Facebook, she also moved the the San Francisco area. However, in 2012 Liz transferred to a new role with in the Facebook company and moved back to the midwest, to the Chicago Facebook

In July 2014 Liz and her Fiancé Ryan Rennaker, whom she meet while attending Stanford, were married at Stanford University were they first meet on Liz’s first day of her Freshman year. They currently live in California and both work for Internet companies. 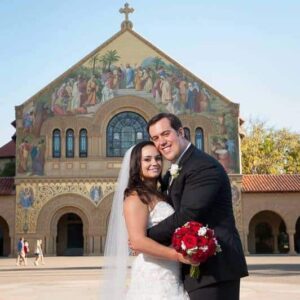 In 2015 Liz was inducted into the Region 5 Hall of Fame. Even today 10 years after her Olympic Trials moment Liz still credits Region 5 for helping her achieve her goals as an athlete in JO Gymnastics, Elite Gymnastics and in Collegiate Gymnastics at Stanford.

Thank You Liz Tricase for being a great representative of Region 5 at the highest level. You have paved the way and inspired the next generation of Region 5 Elite and Olympic Hopefuls. Please continue to inspire and succeed in everything you do throughout your life.