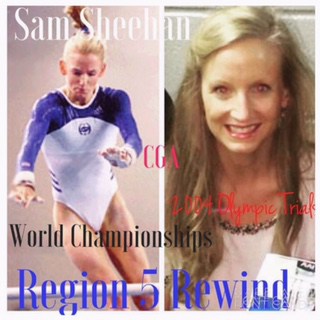 Our next Region 5 athlete was born and raised in Villa Hills, Kentucky, however she trained in Cincinnati Ohio at CGA under the guidance of Mary Lee Tracy.  Mary Lee Tracy really knew how to create an elite athlete and many would seek her out for training in their

pursuit of their Olympic Dream and Samantha Sheehan did just that.

Sam Sheehan always reminded me of Shannon Miller, I don’t know if it was the blonde hair or the beauty she showed in her gymnastics, but for me Sam always resembled Shannon. Sam started gymnastics in 1989 when she was just 3 years old, eventually she would find her way onto

the pre-team, competition team and then before she knew it she made her way onto the US National Team (2002-2003, 2003-2004). On the National Team, Sam had success both nationally and internationally.

Team (this was the first worlds that was individual, which meant no team competition), Sam performed magically in prelims earning herself a spot in the Floor Finals! She would then go on to take the bronze medal on floor. 2002 Worlds Floor Finals

In 2003 Sam collected some event medals in the US Classic and the American Classic she also earned a spot on the US National Team. Internationally in 2003, Sam competed in the USA/Belgium meet taking 1st team, AA, uneven Bars, balance beam, floor and 2nd on the vault.

2004, the Olympic Year, Sam was a member of the US National Team showing great routines at all the competitions she performed. Sam traveled to Athens, Greece for the 2004 Olympic Test Event, she placed 6th AA and 2nd on Uneven Bars. During the test event, Sam had the chance to compete in the Olympic Venue, which I am sure was amazing. After returning from the Test Event, Sam did not compete at the US Championships that year, but she did advance to the US Olympic Team Trials. Sheehan, did not compete beam at the trials, but had solid performances on the

other 3 events. She placed 13th in the AA, but was unable to make the Olympic Team.

After the Olympics, Samantha [a 2003 graduate] went onto the University of Georgia where she accepted a full ride scholarship to compete in gymnastics. Sam competed for the Georgia Gymdogs from 2004-2008. UGA created the Sam Sheehan spirit award in her honor. After

Graduation, Samantha moved to Nashville TN where she worked as a wedding planner before becoming the Head Coach of the Optional Girls Team at Harpeth School of Gymnastics. Sam eventually moved back to Cincinnati, Ohio where she began working at her former training center CGA.

Thank you Samantha Sheehan, for your spirit, your work ethic and your successes. You definitely played a role in helping pave the way for the next generation of Region 5 Elite & Olympic Hopefuls. Hopefully you continue to succeed and inspire in everything you do.

Here are Sam’s Routines from the 2004 Olympic Trials