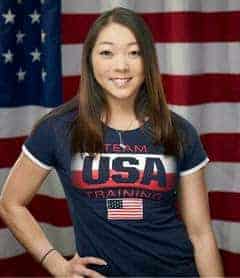 Our next Region 5 athlete did not get her start in Region 5, however her story is one of the great ones of Region 5. Born to two Chinese Olympians, Anna Li who was born and raised in Las Vegas, certainly had gymnastics in her blood.

Anna, started her gymnastics career at six years old at Flyers in Las Vegas until her family decided to move to Aurora, Illinois in 2002. Her parents would go onto coach at Naperville

Gymnastics before opening their own club in 2010, Legacy Elite. Anna was a freshman in high school when she moved to Region 5.  In her first year as a member of Region 5 Anna competed at the 2002 JO Nationals placing 8th in the All-Around, she was also named to the 2002 All-Star Team.  In 2003  Anna competed again as a Level 10 at the JO National Championships placing 7th in the AA, she also was the JO National Beam Champion that year. Having success as a JO athlete Anna decided to enter into the Elite world and in 2003 she competed at the U.S Challenge placing 11th in the AA. In 2004, Anna competed

In 2006 Anna graduated from High School, she had accepted a full ride scholarship to

compete for the UCLA Bruins, in 2007 Anna’s collegiate season began. Ironically, Anna would be competing in Pauley Pavilion on the UCLA campus the same exact location her parents competed in the Olympics Games winning multiple medals as part of the 1984 Chinese Olympic Team.  This was something special for Anna, it gave her a connection to her parents gymnastics past and success.

Anna had a very successful collegiate career at UCLA, placing 4th in the AA in her first NCAA Championships. Li also had success duringthe regular season picking up 9 individual titles.  She also earned first team All-American Honors and she was the only freshman in the conference to be selected to the All-Pac 10 team in the All-Around.  In her sophomore season with the Burins Anna was one of the nations top All-Arounders being

ranked 14th in the nation. Anna racked up 19 individual titles in the regular season. Li also achieved first team All-American honors on the Uneven Bars and was named first team All-Pac 10 in the All-Around and Pac 10 Gymnast of the week for the first week of the season.

2009 started off with a November surgery to remove bone spurs from her ankle, this limited Anna to predominately Uneven Bars, however she did compete a few times on the Balance Beam. In 2009 Anna had one of the most difficult Bar routines n the entire nation. She won the NCAA Regional Uneven Bars Title for the 3rd straight year in a row with a 9.9, she was also the Pac 10 Uneven Bars Co-Champion and named to the first team All-Pac 10 on Bars also winning her 2nd career Pac 10 event title.  In her final season as a UCLA Bruin Gymnast, Anna helped lead the team to its sixth NCAA Team Title, she

Regional Bars title. Anna earned first team All-Pac 10 honors on the Vault and Bars. Anna had a successful senior season, receiving many awards and accomplishments. She received the Pac-10 Special Performance of the Week honors, had 15 individual titles, hit every single routine she competed and moved into the lead off spot on the Balance Beam.

After Anna’s four years of gymnastics was finished, she continued her education with UCLA finishing her history degree. Anna decided she was not done with gymnastics and decided to train along side her former teammate Vanessa Zamarripa who was making a

return to Elite Gymnastics as well. The pair would train at AOGC in Los Angeles sometimes, when they couldn’t train at UCLA. In 2011 Anna graduated from UCLA with a degree in History. By this time her parents had opened their own gym in Illinois, Legacy Elite, Anna returned home and

started working and training at her parents gym. During this time Anna made a few appearances as a gymnast on the ABC Family show “Make it or Break it”. However, the love for competition still burned inside of Anna and in July 2011 she officially announced her return to Elite Gymnastics. Li competed at the 2011 American Classic placing 1st on the Bars and 3rd on the Beam, she qualified to the CoverGirl Classic where she competed again on the Bars and Beam only, she feel on the Bars and ended up placing 7th on the event.

Anna qualified to the 2011 Visa Championships later in the summer, she tied for 3rd on the Uneven Bars and was 14th on the Balance Beam. After Championships Anna would qualify to her first US

National Team. Based on her results and her potential Anna was chosen to attend the World and Pan American Teams Selection Camps to be held at the Ranch. Anna was selected as a member of the 2011 World Championship Team in Tokyo, Jaan.  As part of the Worlds Team Anna, who was in the Alternate position, received a Gold Medal with the USA Team.

The Olympic Year had finally made it, for any gymnast competing or not this is the time everyone waits for, in 2012 Anna competed at the Secret Classic placing 8th AA, qualifying her to the Visa Championships were she placed 3rd on the Uneven Bars, she then went onto the Olympic Trials placing once again 3rd on the Uneven Bars.

Below Anna recounts the naming of the Olympic Team and her reaction and thoughts.

“I remember every second of it! Right after the compeition finished, we all had to go in a waiting room. Before walking into the room, my mom (as my coach), gave me a hug and said “we don’t know who made it, but you did the best you could do.” I remember thinking to myself, “I know I probably won’t be named, but I REALLY want to go….

It was the most uncomfortable few minutes in that waiting room. All of the girls who competed just sat in a circle while the coaches stood behind or on the side of the room. Some girls happy, some girls crying already, and I just sat there quiet. I knew I did everything I could and I was proud of myself regardless of if my name was called. This whole journey was beyond what I ever expected for myself and knowing I did everything I could, every minute of the way the past two years, I couldn’t have asked for more from myself.

When Marta came in and started to announce the team, when the names were called the girls just got up and left the room because we were told we had to run out to the competition floor. I remember sitting there when Marta said “Anna Li” and I was in shock. I don’t think I got up from my seat right away because I couldn’t believe she said my name. It was so surreal and when I walked out to the competition floor, confetti was falling down and I just soaked in every second of it. All the hard work, sacrifice, dedication all paid off for THIS moment.”—–Anna Li, Inside Gymnastics June 6, 2016

Anna made the 2012 US Olympic Team, as an alternate, and would travel to London, England. However, while training in London disaster struck and Anna took a pretty serious fall from the Uneven Bars on a dismount causing her to land on her neck. Unfortunately, this would be the end to her Olympic journey and her gymnastics in general if it was not for this injury Anna had plans to stick around til 2014 in hopes of making the

World Team. The 2014 World Team would travel to China, Anna wanted to end her Elite Gymnastics career in the country that her parents represented at the Elite level and in the Olympic Games.

After retiring from Gymnastics Anna did the post Olympic Kelloggs tour of champions with her World & Olympic Teammates. Once the tour was over Anna returned to Aurora, Illinois and began working at Legacy Elite along side her parents. Anna coaches many of the competitive levels from the compulsories to the Elites. You can see Anna on the floor with her parents at almost

every meet LE goes too. Anna also coaches the TOPs and Developmental kids, she has returned to the Ranch many times for training camps and testings. Legacy Elite is truly a family affair, her younger sister Andrea is an accomplished Level 10 having qualified to the JO Nationals and the Region 5 All-Star Team. Anna, has made the trip to numerous JO

National competitions, she has also accompanied her sister on the All-Star Trip and Gabby Perea on international assignments. Anna is really coming into her own as a coach. Recently Anna became a Brevet Judge, she has judged at the Secret Class, Visa Championship & the Olympic Trials, she also went

on her first international assignment in 2016.

Anna Li has had an incredible impact on Region 5, she has accomplished so many great and wonderful things in her career. Anna truly is an inspiration to young athletes everywhere, she truly showed that there is a life after college gymnastics and that returning to elite 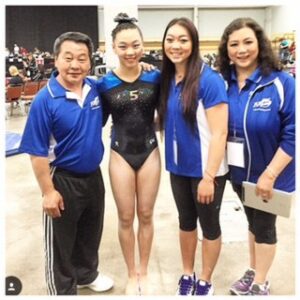 and making it to the world stage is possible. I have seen and spoke to Anna at meets; she truly is a breath of fresh air. It is  fun to watch interact with her athletes and her parents, you can really tell that Legacy Elite is about family.

I wish Anna all the best of luck in her coaching career,  I hope that she continues to inspire and mentor the next generation of Region 5 Athletes. I would like to thank Anna for being a terrific 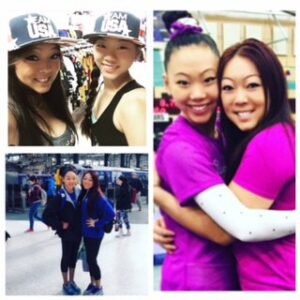 role model and ambassador for the sport of gymnastics.

Watch Anna’s Routines from 2012 and UCLA