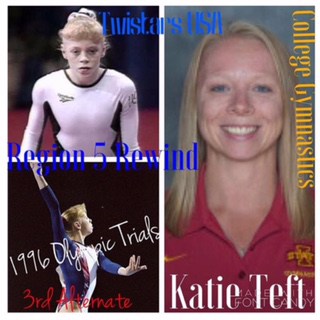 Our next Region 5 Athlete who chased her Olympic Dream all the way to the Olympic Trials, but just missed making the 1996 Olympic Team, is Katie Teft from Gedderts Twistars USA in Michigan. 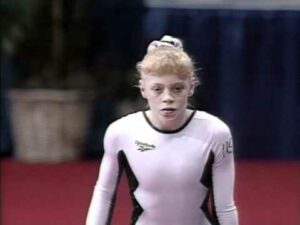 Katie, who is from Grand Rapids Michigan had a pretty successful elite career prior to the 1996 Olympics Trials. Katie who competed under John & Kathryn Geddert at Great Lakes Gymnastics Club found much success between 1993 & 1996, placing top 10 in the AA in almost every meet she competed.  I briefly spoke to John Geddert about Katie and here is what he had to say about his first Olympic Hopeful…..

“Katie was easily one of the most talented and gifted athletes ever to come out of Region 5. She had a unique ability to combine grace and power with a fearless attack during competitions. She had remarkable swing on bars (9.9 at one classic in 1996 and I believe only Dominique Dawes outscored her on optional bars at the 96 Olympic Trials. She was fearless on beam… RO layout mount to immediate flic lay series, RO flic double tuck dismount, She was also a great tumbler (whip whip to full in, triple full, front double twist and her trademark double illusion turn (havent seen one since)”

John also, spoke about some of Katie’s accomplishments before and after the Olympic Games….

“She won JOs in 1993…. in Maryland…. and went directly into the elite program where she won the American and US classic in 1994 before severe severs took a little pep out of her step. She still managed to make the Jr Elite National Team. Her debut at the senior level was at the trial for Senior Pan American games. She stunned plenty by making that team that was loaded with experience and talent (Shannon Miller, Amanda Borden, Amy Chow, Kristy Powell, Mary Beth Arnold, USA won gold and Katie qualified to beam finals…. missing AA finals by .025″ 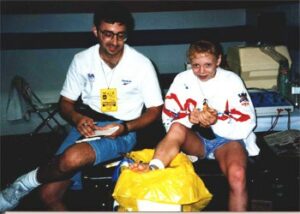 In 1995 Teft was also part of the Gold Medal Winning Pan Am Games Team, she was also on the winning team at the 1995 Visa Challenge. After a successful year Katie was well on her way to being in the mix for the 1996 Olympic Team. However, 1996 would prove to be a rough year for Katie dealing with injuries, gym turmoil and eventually a gym change. Before the 1996 National Championships Katie’s long time coaches, John & Kathryn Geddert decided to leave Great Lakes Gymnastics and Katie decided to go along too. There was a period of time that Katie and the Gedderts found themselves without a training facility. So, they had to find a place for Katie to train until Gedderts Twistars USA was officially opened in July 1996 right between US Nationals and the Olympic Trials.

John spoke about this period in Katie’s training……

“She endured a gym break up in the midst of her bid for the 96 team. We had to train on the road as we were not allowed to training at MSU (our interim home until we opened Twistars) due to a NCAA rule (she lived more than 50 miles from MSU and therefore it was considered a recruiting violation. With the help of the national office she managed to train well and ended up 8th AA (5th highest optional AA). This was the last year of the compulsories and they counted 60% of your score. She had a rare fall on compulsory bars which virtually killed any small chance of making the actual 96 team (in the days of politics that team was pretty much decided prior to the event itself which Moceanu and Miller making the team without competing at trials). As it turned out the USA won Olympic gold for the first time so the team was definitely the right one…”

the 1996 Olympic Trials, Katie at 14 years old was one of the youngest competitors out on the floor, she made the age cut for the Games by only 3 months! Katie had a terrific meet! She had some of the most entraining and different routines in the entire competition, it was always fun to watch Katie perform especially on Bars, then her memorable beam mount (which the Layout Stepout is now being performed by Alyssa Al-Ashari who also hails from Twistars USA). Katie went onto finish 8th AA at the 1996 Olympic Trials, just missing a spot on the team. However, Katie was named 3rd alternate to the team.

Katie did find success following the Olympics she was assigned to the Pac Rim Championships in Malaysia where she helped the USA team win gold and received some individual placements as well. Throughout Katie’s career she had the opportunity to travel to many meets international and represent the USA these meets include:  the Catania Cup in 1993 (Sicily), An assignment to Spain where she was 3rd AA in a stiff field of competition, The Olympic Test event in 96, The Hilton Challenge and Visa Challenge where she helped USA win gold against Belarus, China, Ukraine and other countries.

After the Olympics, Katie took some time off due to injuries, she competed in High School Gymnastics and Level 10, she did not return to the Elite Level. In 2000 Katie did attend the University of Massachusetts on a Gymnastics Scholarship, Katie competed of UMass for 3 years before they lost their women’s program. Katie

competed her senior year at Central Michigan University, which she posted numerous perfect 10s, broke the schools Uneven Bars record and qualified to the NCAA Championships as an individual.

After graduation Katie was an assistant coach at the Michigan State

University, in East Lansing Michigan for 7 seasons. Katie is now married to Mike Minasola and living in Iowa where is has been an Assistant Coach for the Iowa State Women’s Gymnastics team since July 2011.

Katie has been an outstanding athlete, coach and mentor for young gymnasts all over not only Region 5, but the entire country. I remember watching Katie compete as a young gymnast. In 1996 I went to a meet hosted by Great Lakes Gymnastics and I remember receiving a score booklet as a gift and inside it had pictures and fact about Katie and I remember thinking it was so cool that this Olympic Hopeful was from this gym and I was at the meet hosted by her club! I remember watching her in the Olympic Trials in 1996 and feeling a connection because we were both from Michigan. It was a very cool experience as a young 10 year old gymnast.

John and Kathryn also continue to speak highly of Katie….

“Above all of her outstanding gymnastics accomplishments what stands out most about Katie Teft is her integrity, character and appreciation for those who contributed to her success. It has been over 20 years and she is still like a daughter to Kathryn and I. She is a remarkable young lady and a role model for the sport of gymnastics.” 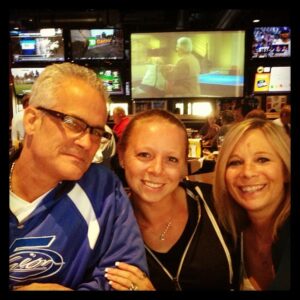 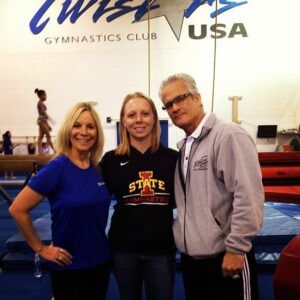 Thank you Katie Teft, for chasing your Olympic Dream and paving the way to the Olympic Trials and the Olympic Games, not only for young gymnasts in Michigan but all of Region 5!

***Photos provided by Google Search and Facebook, Video provided by and Information Provided by John Geddert***