The P&G Championships got underway today from the Honda Center in Anaheim, California and after day 1 Region 5 has 2 in the top ten in the all around. Senior Shania Adams (Buckeye) finished with a 53.95 for 7th and Emily Gaskins (Cincinnati) totaled a 53.7 for 9th. 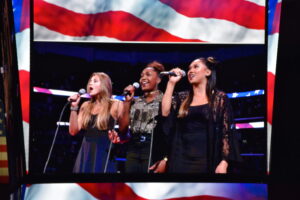 The senior competition opened with a UCLA trio singing the national anthem. The competition began Buckeye’s Shania Adams first up on beam. She began with her triple and double wolf turns that were very well done. After nailing her layout layout (which she struggled with in practice) she hit her beautiful side somi and then waterdown her dismount for a hit set and a 13.9. Emily Gaskins from Cincinnati kicked off competition in day one on floor with her dramatic routine with strong tumbling and 13.1. Gym America’s Leah Clapper showed her will to stay on the beam in layout layout series. Her foot missed and she straddled but hung on which drew a huge applause from the crowd. She hit the rest of her routine for 12.1.

In the 2nd rotation, Gaskins vaulted a nice double twisting yurchenko for a solid 14.5. Leah Clapper bounced back literally on floor stepping out of bounds on her pike full in but almost stuck her double arabian. She landed herself a 12.4 for the routine. Last up in the rotation on floor, Adams hit a 13.45 with a nice double arabian, 2 1/2 front tuck and two 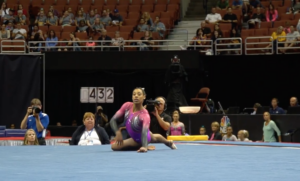 Rotation 3 began with both Clapper and Adams hitting nice full twisting Yurchenkos for 13.1 and 13.4 respectfully. Shania sat in 6th place all around after 3 events. Gaskins was last to go on bars and hit her nice opening combo that ends in a maloney to Pak. She caught her Ricna and a nice double layout to close rotation 3 with a 12.9.

Leah Clapper lead off the final rotation on bars with a nice Maloney to Pak but missed her pike Jaeger but finished with a nice 1/2 in 1/2 out for a 10.5. Shania, nursing a sore back took out her Ricna here but hit a nice set that features a stalder and Maloney 1/2 to high bar, nice Jaeger, and slightly under rotated full out and stepped to the side but much

better then Classics. Gaskins finished her day one on balance beam diving backwards onto the beam in her unique mount. She was solid on her front aerial and layout layout but had a significant wobble on her leg up turn and landed a bit low on her double back for a 13.05.

In the junior competition, Cincinnati’s Lilly Lippeatt began on floor with a nice pike full in and finished with a nice double pike before her cute wiggle and finishing pose for a 13.15. Lippeatt continued on to vault where she performed a nice Yurchenko Full with a good landing to break the 13 mark for the 2nd time in as many events.  The third rotation found our region 5 duo on bars both suffering falls on a similar skill. Lippeatt was up in the first flight of the rotation and missed her Ray (didn’t see her miss one here in Anaheim) but picked it back up and finished with a nice full out to a almost stuck landing.

It’s hard to sit around and wait your turn to compete, but that is what Legacy Elite’s Gabby Perea had to do only competing on bars here at P&G Championships. Perea had to wait a bit longer as she was in the 2nd flight of the bar rotation. After having a solid warm-up, it look like the 2017 US Classic Juniors champion would have her normal go at her bar routine. However she started off missing a connection she rarely misses on the low bar leading up to her maloney to the high bar which may have thrown her off a bit. She did her 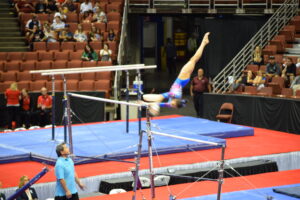 back uprise Ricna and missed the bar coming down hard to the mat. She hopped back up onto the bars and finished her set with a maloney 1/2, pike jaeger and her double layout (which she left out at Classics). She still managed a 13.1 to finish 6th due to her great execution and start value. If I know Gabby, this will be motivating her over the next few days and maybe we will see the upgraded routine.  Have to wait and see!

Lippeatt finished day 1 on Balance Beam with a solid set which features a layout layout, her favorite straddle 1/2 jump (check out todays interview video), and a nearly stuck 2 BHS to double pike for a 13.0. Lilly moved up into the top 20 with that beam set to finish day 1 in 19th place and 10th on floor.