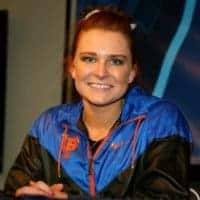 Region 5 is one of the most decorated and accomplished Regions in the entire country, our next Region 5 athlete certainly contributed an enormous amount to that success. Bridget Sloan from Pittsboro, Indiana trained under Marvin Sharp at Sharps Gymnastics for her entire career. Bridget who was born in Cincinnati, Ohio began gymnastics at Sharp’s at the age of 4. Bridget set her sights on the Elite level pretty quickly becoming an Elite at the Age of 10! Bridget was named to the USAG Child Elite National Team.

In 2007 Bridget would move into the Senior ranks and finally have the opportunity to represent Team USA at the highest level. In 2007, she competed at the U.S Classic held in Battle Creek, Michigan placing 1st in the AA and top 3 on the each event. She went onto the Visa Championships where she placed 5th in the AA and 2nd on Floor. Bridget also competed internationally in 2007 at the Houston International Invitational, The USA vs Great Britain

International Competition, She was the 1st Alternate to the World Team in Stuttgart, she also rounded out 2007 competing at the Good Luck Beijing event and the Toyota Cup in Japan placing very well at each international competition.

However, 2008 was the big event the Olympic Year! At the beginning of the year Bridget was on the Team that traveled to Jesolo, Italy for the City of Jesolo Trophy Meet, where she placed 1st with the Team. During this meet misfortune struck Bridget was forced to sit out of the competition and  would not compete again until the Visa Championships in the summer. Bridget had suffered a meniscus tear which required surgery to repair,

having surgery this close to the most important meet of her life was a bit nerve wracking for Bridget. At Visa Championships Bridget only competed on Bars and Beam placing 3rd & 7th respectively. Bridget was definitely showing signs of promise and that she was ready to vie for a spot on the Olympic Team. At Visa Championships Bridget was named to the National Team and invited to the 2008 Olympic Team Trials.

At the Trials, Bridget did have a few mistakes, but she showed readiness to prove to the selection committee that she was back in top form and deserved a spot on the team. Once trials concluded 14 girls were invited to the Olympic Selection Camp to be held at the Ranch in Houston, Texas. At the conclusion of the camp, Bridget was named to the 2008 U.S Olympic Team and would travel to Beijing China.

During the Olympic Games, Bridget had solid routines she competed in both the qualifying and team finals. In the qualifications Bridget’s routines were critical do to that fact Team USA had two injuries right before the competition, so the USA was forced to put up 4 routines on three of the events. In the Team finals Bridget competed on Vault, contributing to the overall team score and helping the USA earn a Silver Team Medal.

After the Olympic Games were finished, Bridget traveled on the Tour of Champions for a few stops, but decided to hold onto her NCAA eligibility and continue training to be ready for

competition in 2009 and make a run at another Olympic Team. Bridget was the youngest member of the US Olympic Team, so it was only natural for her to return to Elite competition. Heading into 2009 Bridget would find herself with a new training partner, her 2008 Olympic Teammate Samantha Peszek would join her at Sharp’s.

In 2009 Bridget started off her season at the Tyson American Cup, placing second to a fellow Region 5 Elite and future Olympian Jordyn Wieber, who at 13 years old was competing as a junior in the senior competition. After the American Cup Bridget traveled to France & Germany for a friendly exchange meet, the USA placed 1st as a team at both

meets and Bridget took home All-Around Gold. 2009 proved to be a very successful year for Bridget winning every competition she entered. Bridget would become the 2009 US National Champion and a few months later the 5th US Women to win the World Championships Gold Medal.

the Uneven Bars. 2011 was a slow year for Bridget she had suffered a few different injuries in 2010 and needed to get healthy from those. She did not competed at the U.S Nationals nor the World Championships
however, she did earn a spot on the Pan American Games Team where she competed on Bars and Floor helping Team USA place 1st as a Team.  After a successful showing at the Pan American Games, Bridget petitioned into the 2012 U.S

Championships, she was unable to compete at the U.S Classic because her coach was unable to be there do to his fathers funeral. At the U.S Championships Bridget competed on all 4 events for the first time since 2009. After the competition Bridget had earned herself a chance to

compete at her 2nd Olympic Trials. However, on the first day of competition she fell from the Uneven Bars and injuries her elbow, withdrawing from the competition and thus preparing herself for the next chapter of gymnastics an life as a student-athlete on a full scholarship at the University of Florida.

Bridget really excelled in college gymnastics, in her freshman season (2013) with the Gators Sloan took top honors in the AA, Balance Beam and with the Team which was also Florida’s first NCAA Team Title, she also placed 2nd

on the Uneven Bars and 4th on Floor. Bridget is an eight-time All-American in numerous events in the Championship Season and the Regular Season. In 2013 Bridget was also named as the 2013 recipient of the Honda Sports Award, recognizing her as the outstanding women’s college gymnast. Bridget became only the fourth freshman to win the honor in the award’s 37-year history, and the second consecutive Florida freshman to win.

Moving onto Bridget’s Sophomore Season with the Gators, she helped lead he team to its second consecutive NCAA Team Title. Bridget also won the Uneven Bars title and racked up several All-American honors as well at the SEC Gymnast of the Year and first team All American status on all four events. For Sloan, 2015 was plagued with injuries and perfect 10s, she was forced to sit out 5 meets with an ankle injury. Bridget returned to

competition near the end of 2015 and helped the Gators capture their third straight NCAA Team Title. She again earned first team All-American honors and she became the first gymnast from Florida to earn perfect 10.0s on all four events, and is only the seventh NCAA gymnast ever to achieve this honor.

In 2016 Bridget’s senior season with the Gators, she finished her college career the same way she started it as the NCAA All-Around Champion, she also added another Uneven Bars and Beam Title to her resume.

Bridget has earned many honors in her time as an athlete, she was inducted into the Indiana Sports Hall of Fame, The Region 5 Hall of Fame and she has earned something no other gymnast has before her, the Trifecta! She has won an Olympic Medal, The US National Title, The World AA Title and 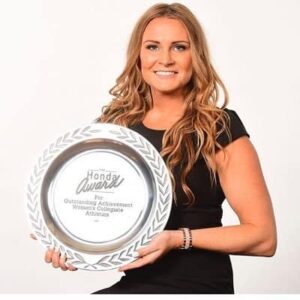 In 2016 Bridget graduated from the University of Florida with a

degree in communications, as of right now Bridget still lives in Florida and is contemplating Graduate School. No matter what Bridget decides to do following her Florida Graduation, I know that she will strive for perfection and accomplish anything and everything she sets her mind too.

Thank you Bridget for everything you have done for the future of Region 5 Elites, Olympic Hopefuls and anyone who you

have touched with your amazing gymnastics career! I hope that you continue to inspire and succeed in anything and everything that you do in the next chapter of your life. 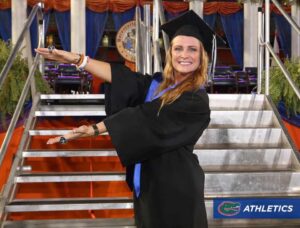