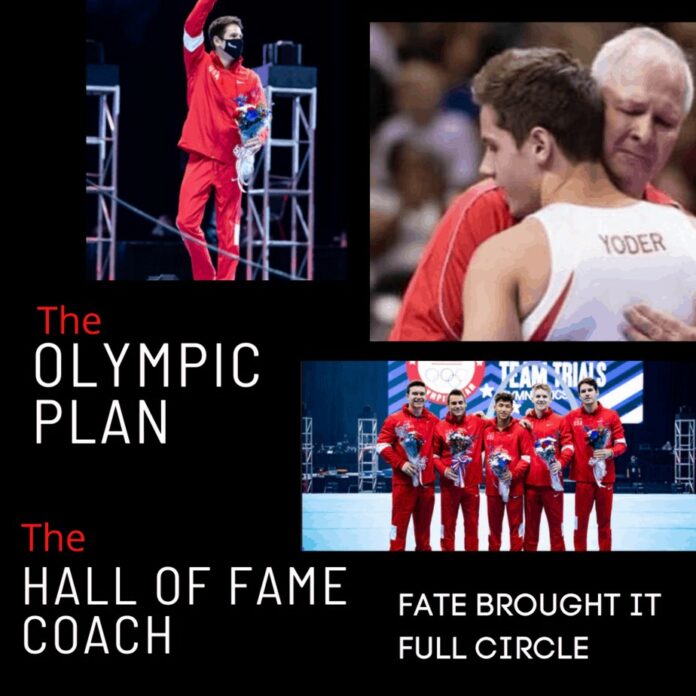 Do things happen for a reason?  Is there a plan for how your life will unfold?

What if hard work meets at the crossroads of luck and fate?

ST. Louis, June 26, 2021- US Olympic Trials Day 2 for men and the final night of competition to decide a 5-man olympic team and the 5 replacement athletes. One of the athletes looking to earn a spot on Team USA for Tokyo put all his chances on one event.

The one event that was on the weaker side when talking about the US Men’s program…. Pommel Horse.

But with a four man team, taking a specialist could be risky in the pursuit of a team medal at the Olympics. Thanks to the USA Men’s performance in Brazil (specifically Paul Juda) at the Pan American Championships, one nominative spot was awarded to the United States and would most likely go to a specialist.

June 26, 2009- 12 years to the date of day 2 of Olympic Trials, Alec Yoder sat down at a folding table at Indy School of Gymnastics with coach Gene Watson to decide whether he would switch gyms. Alec had taken part in a trial week of training with Gene the week prior to this meeting.

Gene Watson, one of the most respected men’s coaches in Region 5, asked Yoder at this meeting ” What do you hope to get out of your gymnastics career?”

“I want to represent the USA at the Olympic Games” – Alec Yoder.

On an ancient Apple laptop was a plan: “Alec’s Path Spreadsheet.” It detailed what needed to be accomplished during his career for his goal of being an Olympian to come to Fruition. 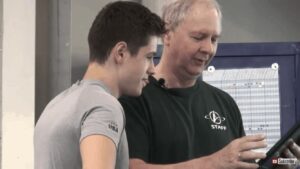 Check out Alec and Gene in action from back in 2015

These are only highlighted milestones on the detailed path that Gene and Alec set out to accomplish, with the help along the way from the Ohio State coaching staff,  the program for which he competed in the NCAA.

“I followed it and wish he was here to see it come to fruition” – Alec Yoder.

Gene Watson passed away in April of 2020, 3 months before Yoder was to hopeful reach that ultimate goal of the plan- MAKE THE OLYMPIC TEAM.  However the Pandemic postponed the Olympic Trials for another year.

June 2021- The announcement of the USA Gymnastics Hall of Fame Class of 2021 and on that list… Gene Watson. The induction ceremony would take place in St Louis following Day 2 for men’s competition at trials.

Was this fate?  Or a lucky coincidence?

Alec Yoder performed two solid pommel horse routines over the two days of trials and accomplished what Gene and him set out to do 12 years ago, be named to the Olympic Team.

Gene was a man of very few words but Alec knows a hug and a good job would have followed the Olympic announcement.

“I feel like it was meant to be; This was my tribute to Gene”- Alec Yoder.

As Alec’s mom Rebecca said so eloquently on Facebook, “What a testament to Gene’s vision and brilliance, Alec’s belief and work ethic, and God’s faithfulness and goodness.”

Hard work, coaches that believed in Alec, the plan, and some luck and fate all wrapped into one. Everyone has a story behind the scenes that leads to the monumental athletic accomplishment.

Now only one more bullet point on the plan remains,