Jones Jumps to 8th after Day 1 of Olympic Trials 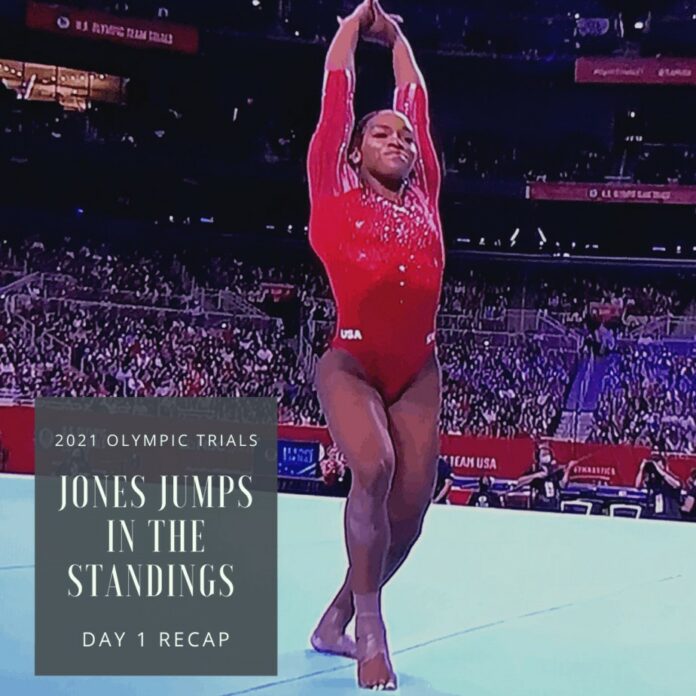 It happened one year later, gymnastics from the 2020 US Olympic Trials finally flipped into action in St. Louis last night.

The Olympic Trials is the culmination of a life time of work every four years or in this case five and 17 gymnasts (18 qualified but Skye Blakely was injured in touch warm-up) took to the podium, saluted the judges and accomplished a goal that most gymnasts never do….. compete at the Olympic Trials.

Region 5 was lucky enough to have one athlete achieve that dream and compete in her first Olympic Trials. Shilese Jones of Future Gymnastics sparkled in red on Day 1. Shilese came into trials ranked 12th after USA Championships and moved up to 8th with a 54.999. The scores from championships are not counted in the trials scores but will factor in when the selection committee decides the team and alternates.

The olympic order is what Shilese got to compete in day 1 of competition which means starting out on an event where she is one of the best in the country…. Vault!

“SHe can Fly”- Tim Daggett

Shi can Fly… The Yurchenko double full vault is the “compulsory” elite vault elites need to be competitive. Shilese not only competes the vault but launches it in the air and always finds an excellent landing when she returns to the mat.

Flying high is Shilese’s signature trait when it comes to her gymnastics and uneven bars is a place where many in the gymnastics circles marvel at her amplitude. She has crisp in bar circles with pirouettes, effortless bar to bar transitions and sky high single bar releases.

She has the potential to be one of the top scores in this competition but despite a huge Stalder piked Tkatchev as normal, she was a bit far from the bar on her Pak salto to the low bar and hit her feet on the floor. However the next time her feet hit the floor they didn’t move nailing her double front dismount for a 13.166.

There have been a few full in dismount additions to balance beam this season and Shilese showed one of her own during podium training at nationals. Shilese had some struggles on beam at championships and made some changes to her routine for trials. She replaced her beautiful two back handsprings layout 2 feet (that also launches off the beam) with a safer, more reliable back handspring layout step out. Her 13.533 on beam in day 1 was over a point better then the top score she received on the event in Fort Worth.

She competes floor for her dad as her routine is dedicated to him. She isn’t doing all she is capable of on floor but her “Jones” (named for her in Level 10 code) continues to wow crowds in her opening tumbling pass. She fought to stay in bounds on her third pass the double arabian and won that fight. Shilese ended her day with a 13.4 which fell right in the middle of the pack amongst many 13+ floor routines.

Shilese improved her performances and standing since championships and sits in good position to move up and make her claim for a spot on this Olympic Team.