First Battle in Fort Worth, R5 Alums look to claim an NCAA Championship

This weekend the 2016 NCAA Women’s Gymnastics season comes to a close with the NCAA Championships in Fort Worth, Texas (site of the upcoming Level 10 JO Nationals). The competition will begin Friday with 2 semi final rounds of  6 teams plus individuals in each. The top 3 teams in each session will move on to the Super Six on Saturday for a chance to claim this years National Championship. Here are the 12 teams competing in this years championships 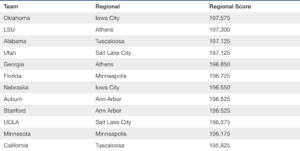 Of the 12 teams competing, 6 have Region 5 alums on their roster. Along with these athletes, 5 other R5 alums are representing their respective schools as individuals. Lets take a look at our former Region 5 gymnasts taking part in the championships.

Top seed Oklahoma competes in the 2nd semi final session on Friday. The Sooners are lead by seniors Haley Scaman (IGI) and Keeley Kmieciak (Phenom). Haley competes on three events for OU and finished the regular season ranked 5th in the country on floor (big double layout). Keeley competes in the all around for the Sooners and posted a perfect 10 on bars at the BIG 12 championships.

Alabama comes into the championships as the 3rd seed and will compete in the evening semi final. Amanda Jetter former elite from Cincinnati Gymnastics is a solid 9.9+ in several events. Amanda is a regular in the Crimson Tide bar line-up with a career best of 9.925 on the event.

The defending National Champions, Florida, come in as the 6th seed and will compete in the early semi final. The Gators feature the nations top all arounder, senior Bridget Sloan (Sharps). Bridget has played a big role on her Gator team for the last 4 years and is looking to cap off her career with a 4th consecutive national championship. Fellow senior Bridgette Caquatto (Legacy Elite), will be looking to finish off her career on a high note as she will compete in vault, bars and floor for the Gators.

Nebraska is the 7th seed competing in the evening semi final session and features 3 alums most of any team in the competition. Junior Jennie Laeng (Olympic Dreams) and sophomore Grace Williams (Twistars) compete in the all around for the Cornhuskers posting mid 39’s at regionals. In her freshman year, Megan Schweihofer (Hunts) is a regular in the vault and beam lineups with both of her scores counting at the Regional Championships.

Auburn comes in as the 8th seed and will compete in the first semi final session. Senior Kait Kluz (Oakland) has been a rock for the Tigers in her four years and competes in vault, bars and floor. Kait was a big contributor to the Tigers win at regionals posting a 9.9 on floor and 9.85 on bars.

UCLA enters the championships as the 10th seed and features powerhouse vaulter and tumbler Madison Preston (Cincinnati). Madison tied for the top vault score of 9.9 at regionals. UCLA will compete in the evening semi final session.

The 11th seed Minnesota competing in the first semi final session features two alums that share the same name and club gym. Junior Rachel Haines and Freshman Rachel Cutler were club teammates at Twistars and are now contributing to the success of the Gophers. Haines is a consistent member of the vault and beam line-up posting 9.8 on both at regionals. Cutler is the lead off on uneven bars posting a 9.8 at the Big Ten Championships.

In addition to  the above alums, 5  others qualified to the championships as individuals. These athletes will compete along side one of the 12 qualifying teams vying for a national all around or event national title.

The University of Michigan narrowly missed out on another NCAA appearance counting a fall on beam at regionals. However two Wolverines qualified to NCAA’s in the all around. Junior co captain Nicole Artz (Champion USA) and Sophomore Brianna Brown (Cincinnati) will experience a nationals without their team for the first time. These two athletes helped lead Michigan to the Big Ten Championship this season. Nicole will compete in the first semi final rotating with LSU. Brianna will take the floor in the 2nd semi final rotating with UCLA (and fellow Cincinnati teammate Madison Preston)

Arkansas ended their season short of the goal as well but will send Junior Amanda Wellick (Legacy Elite) to nationals in the all around for the 2nd time in her 3 years as a GymBack. Amanda is one of the leaders of the Arkansas squad and is a well rounded gymnast on all four events. She will compete in the 2nd semi final rotating with Utah.

Denver senior Nina McGee (GymNation, Cincinnati)  has been the talk of the NCAA this season with her 3 perfect 10’s on floor and ranking amongst the top in the all around all season. Nina makes her second consecutive trip to the NCAA Championships in the all around and looks to close out her gymnastics career the same way she performs on floor…. with Perfection!

Lindsey Offutt (Oakland), senior at the University of Pittsburgh, qualified to compete in the floor exercise. Lindsey got to compete at regionals in front a hometown crowd in Ann Arbor and used that energy to post a 9.9 and tie for the win on floor. Lindsey who has set records at Pitt in the all around, looks to end her career on the NCAA’s biggest stage.

Good luck to all our alums competing in this years NCAA Championships and enjoy this final competition of 2016 or for some the last of your careers!