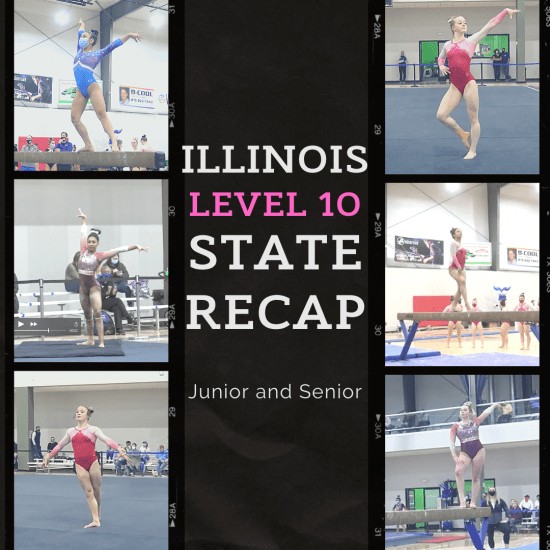 The 2021 Illinois Level 10 State Championships hosted by Aerial Gymnastics featured two sessions (Junior and Senior) of three age groups each. There were twenty five 37+ AA scores with twenty three different individual event or all around champions amongst all competitors.

This competition proved to be an exciting one from all the cheering and team energy (masks included) throughout the competition to Phenom Gymnastics winning the super team title becoming the best Level 10 team in Illinois for the first time ever with a 116.975.  In 2nd place was Legacy Elite with 115.575 and taking home third with a 114.05 was Midwest Elite.

Congrats again to our 52 graduating seniors (some didn’t participate at state meet) and thank you for all you have done for Illinois Gymnastics and Region 5!

The top score of the competition was posted by Level 10 National qualifier and future Michigan State Spartan Skyla Schulte who won 3 of 4 events in the SR B age group including a 9.875 on beam to post a 39.175 in her final state meet. The vault title was won by Phenom’s Lucy Lehman posting a 9.825 for her Yurchenko layout 1/2.

Skyla’s teammate Haley Tyson, soon to be Minnesota Gopher, won the SRC age group winning three events herself while posting a 9.9 on bars to finish with a 38.925. Haley competed a Yurchenko 1 1/2 on vault, one of only 3 one and a half twisting vaults in the competition (the other two Makenzie Sedlacek- Midwest Elite 9.9, and Cassie St. Clair- Aspire 9.65). In second place by one tenth of a point, BIG’s Kaitlyn Grimes tied Haley for the state beam title with a 9.5 and floor title with a 9.7 to post a 38.925. The vault title was shared by Sedlacek and Midwest Elite’s Gabi Stephens with big Yurchenko full that she dropped in for a stuck landing and a 9.9.

2018 Region 5 Level 10 JRB All Around Champion, Alayna Karl from GymNasti, won the SRA age group with a consistent performance finishing in the top 5 on all four events including her 2nd place finish on bars to total a 37.85. In this age group there were 6 different event champions (ties on beam and floor). The vault title was won by BIG’s Olivia Herrera with a nice Yurchenko layout 1/2 for a 9.725. Midwest Elite’s Mackenzie Patricelli swung a nice pike jaeger to win the bars title with a 9.55. The beam title was shared by Makenna King (Phenom) and Natalie Homerding (Flipstar) each posting a 9.3. On floor another Flipstar athlete tumbled her way to the title with an impressive front double full front pike posting a 9.75 to tie 2019 Level 10 National qualifier Amy Wozniak from Legacy Elite who opened her routine with an impressive tuck full in. There are always those athletes that make their mark at state and Alexis Holmes from Tri-star was one of those athletes. Alexis finished 6th in the all around here but showed some impressive gymnastics including a very nice Pak salto on bars. Alexis is a name to remember for the future if not in 2021.

In the Junior A age group, GymNasti claimed another state all around title as Railey Jackson won vault and beam to post a 37.825. Taylor Gomez tied Railey for the beam title with a 9.45. Kaitlyn Schwab from Aspire finished with a very powerful double layout dismount to win bars with a 9.575. The top score of the age group was posted by Flips Delanie Kelly for well performed floor routine and a 9.7 to take home the floor state title.

2019 Level 10 National Qualifier Sammy Macasu won the Junior B all around title with a 38.025 (only 38 in the junior session) and won vault in the process with a 9.5. The top score of the session was achieved by Sydney Jelen on bars winning the event with a 9.875 (tied with Reese Samuelson). Both Sydney and Reese transition from bar to bar with ease as well as hit the handstands. Phenom’s Audrey Rapaduski won beam with a very impressive 9.675 which was the highest beam score in the junior session. In only her second year as a level 10 (first level 10 state however Covid in 2020), Reilan Garvey from UGA won the floor title with a 9.6. Reilan is one of the athletes that stood out in this competition as one to keep your eye on this year and beyond.

Phenom captured a third state all around title with Marisa Fisher taking the Junior C championship. Marisa is a powerful athlete and took home two more titles on vault (9.825) and floor (9.65) which she opens with a full in. As I mentioned above Reese Samuelson tied Sydney Jelen for the highest bar score of 9.875 to win the Junior C bar title finishing off the routine with a stuck double layout. The beam title was won by Crystal Lake’s Samantha Rose as she nailed her front aerial immediate back handspring layout stepout series for 9.5. Samantha is another athlete that was impressive to watch and one to keep your eye in moving forward. One more athlete that needs mentioning in this age groups is Kiera O’Shea from All Around Gymnastics who finished 4th in this age group. Kiera has a very nice Yurchenko Full on vault as well as a cool clear hip immediate half in half out dismount combo on bars. She unfortunately had some problems on beam at state but was very impressive overall.

See you in Cincinnati!