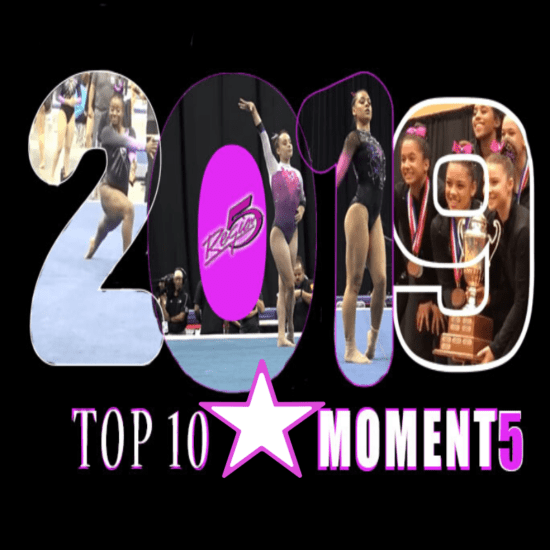 As we all look forward with excitement, anticipation, and maybe even a bit of uncertainty to what 2020 will offer, 2019 will be remembered as one of the most exciting, if not ever for sure, this decade. Let’s look back at some of the moments that stood out for us in 2019. Here are our top 10 moments from 2019:

#10- PERFECTION– Sierra Brooks scored a perfect 10 on balance beam at the 2019 UGA Invitational. Sierra’s beam has become one of her best events, which features a layout layout series, kick over front, switch leap switch leap and a double back dismount.

#9-Full Representation- Region 5 All Star/Elite Ambassador team included an athlete from all 5 states in our region for the first time since 2009.

#8- Title Takers- Region 5 won combined 12 all around titles and 35 individual titles between Easterns and JO Nationals.

#6- The Bar Routine- Lilly Lippeatt from Cincinnati competed a whole new bar routine in 2019. She improved over 6 points on bars (combined both days of competition at USA Championships) from 2018 and made the 2019 USA Junior National Team.

#4- Tears to Titles- The Region 5 Senior D’s shed enough tears during their session at JO Nationals that they basically floated their way to the age group team title. Most of these athletes were competing for Region 5 for the last time, which was very emotional, not to mention the dominating performance they had over the competition winning by almost 3 points. The final rotation on bars will go down as one of the best moments in Region 5 history: stuck landing, huge roar from the team and crowd followed by tears, REPEAT! Oh, and they also won every event and had 4 of the top 5 all around finishers. DOMINATION!!!!!

#3- Gabby the Great- Gabby Wilson won back-to-back JO National AA Titles and 3rd total, becoming only the second Region 5 athlete to do that in this decade (Grace Williams, Twistars 2010, 2012, 2014). She also won her second consecutive floor title and 3rd overall to finish her JO career with 6 individual event titles.

#2- Sixth Time a Charm- It took her 6 appearances at the Nastia Liukin Cup, but Makarri Doggette finally achieved one of her goals by winning the 2019 Cup. Makarri won 3 of the 4 events to claim the all around title by one tenth of a point.

#1- Champions Again…. Finally! Region 5 won Level 10 JO Nationals for the first time since 2014. Sunday at JO’s was so exciting with Region 5 capturing 4 of the 6 age groups. On both sides of the competition floor, the cheers were loud, the gymnastics on point, and together our Region put on a show that will be tough to top. Our region certainly took our team moto to heart and did just that… FLEX ON ‘EM!!!!!!