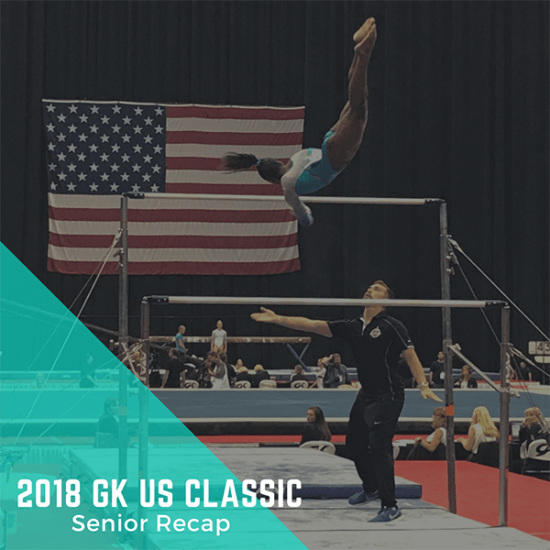 What do you call a competition with the former World and current Olympic champion along with the current World All Around Champion? A show you couldn’t miss….

The energy in Schottenstein Center was already high during warm-ups as the crowd filed in to watch the return to competition of Simone Biles. Though the 6,190 spectators strong let a big roar out for Simone when she was introduced, the loudest applause came for the current world champ Morgan Hurd. Our Region 5 athletes had a pretty large cheering section as the meet was held in the city (or close to) where Shania Adams and Shilese Jones train hailing from Buckeye Gymnastics and Future Gymnastics respectively.

The first rotation found Shania up first on bars, the event she had some struggles on in podium training but rocked her set including that Maloney Pak combo that gave her problems for a 13.75. She finished the routine and came off the podium to a huge hug from coach Kittia Carpenter. Meanwhile over at beam Shilese nailed her standing arabian that lands like a dart into the beam. She finished up the near wobble free set with a stuck two backhandsprings into a double back and a 13.2. Shilese began on beam at American Classic and fell so she was happy to get that one done.

video by: USA Gymnastics
In rotation two Shilese used her power (walks into a huge double double) and clean landings on her double arabian and full in to score a solid 13.3. Her coach Christian was clapping with excitement on every landing. Shania began her beam routine as she always does with near perfect triple to double wolf squat turns but unfortunately was off on her layout layout series and though tried to surf save it came off. She was a bit off on her double full dismount and scored a 12.45. The standings after the midpoint of the meet had Shilese in 10th and Shania in 13th (remember both had already qualified to championships).

As she mentioned in her interview, Shania has been nursing a back injury and watered down some of her routines at American Classic. Here at US Classic, she put back in her double arabian to stag jump but was slightly off to side and stepped out of bounds. She was a little off on her 2 1/2 front tuck stepping out of bounds again but finished with a strong double tuck for a 12.85. Though her tumbling was a bit off today, her performance quality of her routine was very nice  and of course her turns including the triple Memmel turn at the beginning (not easy at all) stand out everytime.  Shilese launched a 14.45 double twisting Yurchenko into the air and landing back on earth in 5th place after 3 events.

In the final rotation Shania went early in the rotation and attempted her double twisting Yurchenko but was a quarter short landing in a deep squat and falling onto the mat. She only competed a full in Utah at American Classic so it was good for her to put it out on the competition floor for experience before nationals. Shania was able to put in all her upgraded routines and will now be looking to polish them up before nationals in Boston.

Shilese went last in the final rotation just as Simone was wrapping up a 15.2 on balance beam. However Shilese was on fire swinging her way to a 13.85 on bars and 4th place in the all around with a 54.9. This session was filled with everything you could imagine… comebacks, double twisting double layouts here and there, new upgrades all around the arena and most of all the anticipation of a great competition in Boston 3 weeks from now.