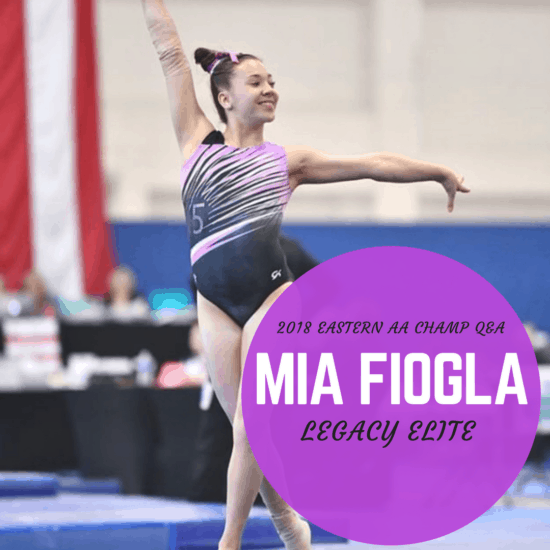 Our next Level 9 Eastern National All-Around Champion is Mia Figola of Legacy Elite. 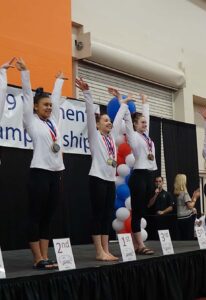 Tell us how your meet went? Walk us through each moment of your day, warmups, events, etc…I had spent the entire day before the meet traveling so I really had a lot of time to think. Going into the competition I was just focused on having fun and competing as a team rather than an individual. I made sure not to look at the scores, but to just do the best that I could with whatever situation I was put it. The girls I competed with were so kind and the coaches were all so supportive, which helped ease the pressure going into the first rotation. By the last rotation, I wasn’t aware of how my scores were compared to the other girls, I was just glad that the meet hadn’t been a complete disaster. While waiting for flight B to finish competing the girls from region 5 were all able to sit together as a group and get to know each other. It was truly an amazing experience. 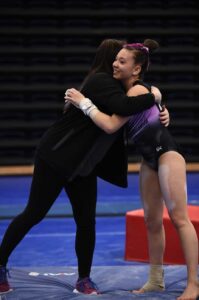 next event? In between events I normally don’t like to think about the next event. Watching and cheering for the other girls in my group helps to calm my nerves, and sometimes I like to do some drills on the floor to keep warm.

Tell us about the atmosphere of the meet compared to regular season meets you have been too. The atmosphere at Nationals is incredibly upbeat. At normal meets you can feel the tension as soon as you walk in the door. But walking in to nationals you can really feel the energy and the excitement between gymnasts.

What is it like being part of Region 5 at Eastern Nationals? Being a part of Region 5 at Eastern Nationals is an honor. As someone who has followed region5insider on social media for years, to finally be a part of the region 5 family is really cool. As a team, region 5 definitely stands out with the flashing sunglasses and the crazy event cheers. There is nothing but support and encouragement coming from all of the region 5 coaches and teammates. Since the expectations are high for Region 5, it motivates you to really strive for your best and it makes you proud to be wearing the number 5 on your leo.

How has your experience been here at Nationals? What have you been doing besides competing? In New York where the meet was, I was able to visit Niagara Falls and do some other exploring, which was beautiful and unlike anything there is to see in Illinois.

When the meet was over what was the first thing you did to celebrate the win? Before the meet I had told my Dad that if I placed in the top three for all around, he would have to buy me frozen yogurt. So right after the meet we went to get frozen yogurt. 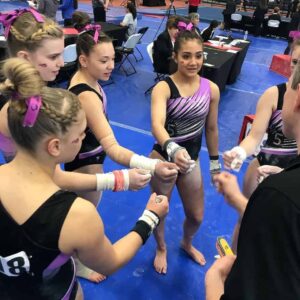 maid.” Saying the silly cheers right before starting that event made us all feel a little less pressure and pumped us up as a team.

Anything crazy or funny happen during your meet today? After our beam rotation one of the region 5 coaches had a little finger puppet that looked like a giraffe. He moved the giraffe in front of the projector that was projecting the scores, and made it look like the giraffe was running around on the bottom.

Compared to the other regions on the competition floor, I feel that region 5 has the most team spirit. What sets region 5 apart, other than gymnastics, is the support that is given to every gymnast, regardless of how they performed. 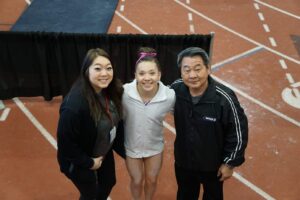 Who inspired you the most? What did they say to you? How did you get amped up and motivated? In the beginning of warm ups I was feeling really nervous about competing, but one of the coaches from our region 5 team got all hyped up and was shouting “Let’s go girls!” Then he started jumping around and punching the air which made us all laugh. And from that point on I felt a little less nervous and began to really understand that this meet was not only about performing well, but also having fun together as region 5.

Mia was also member of the Senior 5 Team that picked up the 2018 Eastern National Team Title in Rochester, New York.  Mia also picked up two silver medals on the Uneven Bars and the Floor.