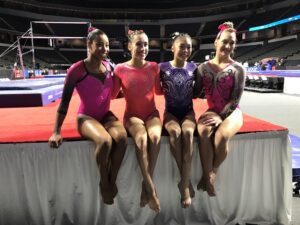 The senior session has concluded bringing a close to the 2017 US Classic. When all the chalk dust settled Region 5 had two in the top six of the all around. Cincinnati’s Emily Gaskins and Buckeye’s Shania Adams tied for 6th. Gaskins had a consistent day hitting all four events while Adams had a bit of a slip up on her bars dismount otherwise a solid day for both. Gabby Perea of Legacy Elite who competed in the senior session, won the junior uneven bar title. Leah Clapper had a rough go at it but will have the chance to redeem herself as all the seniors will be taking their talents to Anaheim for the 2017 P&G Championships three weeks from now.

Here are the top 6 AA finishers:

Here is a full recap for all four rotations from our Region 5 seniors:

Leah Clapper of Gym America began her competition on balance beam and it was a shaky start with a fall on a straddle 1/2 and big wobble on switch 1/2 but pulled it together and finished with a good double pike (bit low on landing) for a 11.85. Shania Adams kicked off her competition on floor with a beautiful Memmel turn, and 2 1/2 front tuck but gave up some deductions with landings on her other tumbling passes for a 13.25.  Cincinnati’s Emily Gaskins, who was last up on beam in rotation one, grabbed the crowd’s attention right from the start her back dive mount onto the beam. She was solid throughout the routine and finished with a stuck BHS combo to double back for a 13.3.

Clapper lead off rotation 2 on floor with a solid pike full in, a bit low on her double arabian stag jump but finished strong with 2 double backs for a 12.6. Adams hit her nice FTY for a 13.4. Gaskins like Adams opens floor routine with a beautiful Memmel turn before her powerful double layout. Her nice presentation and strong tumbling landed a score of 13.5 for the event.

Adams lead off rotation 3 on bars with beautiful connections including her Ricna Pac had both Stalder and Maloney 1/2’s but pulled in a bit on her dismount, seemed to get lost and opened out before finishing the last 1/2 and landed on her butt for 12.4. Gaskins hit a nice FTY on vault for a 13.5. Clapper also performed a FTY with close to a stuck landing for a 13.15.

Due to some magic luck of the draw, Shania was up first again in the 4th final rotation this time on the balance beam. She started her routine off with her double wolf turn a nice layout layout combo, a little wobbly on leap series, solid side somi and finished with 2 BHS to 2 1/2 that was slightly under twisted for a 13.7. Gaskins topped off her solid day with a well done bar hitting all her connections at the beginning of the set, right on with the 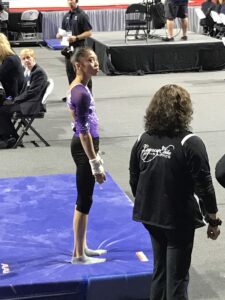 Ricna, and finished off with a nearly stuck double layout for a 12.45. Gabby Perea, Legacy Elite, (junior competitor) finally got her chance to perform in front of her hometown crowd in the final rotation on her best event bars. She nailed her opening connections but broke the Ricna Pac salto connection and only finished with a layout flyaway to save the injured ankle scoring a 14.5.  Clapper who is competing almost a completely new bar set this year missed her maloney 1/2 but finished strong with a full out small hop for a 11.45.