The 2017 Region 5 All Star trip begin with a nice send off courtesy of the Olympia gymnastics team as we began our journey with a stop at Niagra Falls Canada then onto Montreal and the #2017MLTgym world championships and experiencing behind the scenes at Cirque du Soleil. This week our All Star Team and coaches will be blogging about the trip from their perspective. 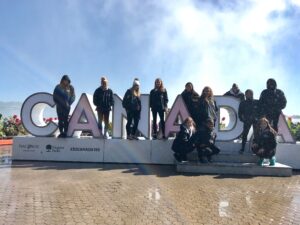 After waking up at 3:30am, I headed to my gym and away Nick, Erin, and I went to Michigan. At twelve, we met up with all of the rest of the All Star Team members and their coaches. We drove and once we reached the border, we got out and quickly got through to Canada (it was extremely quick to get through, really surprising)!! The ride was long…so there was a lot of sleeping, a lot of laughing, and a lot of coloring. Once we reached the area near the hotel, you could easily see how pretty the architecture and presentation of their buildings was. We checked in and before we knew it we were crossing the street and were at Niagara Falls!! It is so beautiful that it is hard to explain and the rainbows were so vibrant that you could make out each color individually. We ate at a restaurant that had a view of the Niagara and we could all see the different colors being projected onto the water. Our food was amazing, each given the choice between salmon, prime rib, chicken, and ravioli. It was impressive to just turn to the left and see gallons of water creating these beautiful waterfalls. Once leaving the restaurant, we all headed back to the hotel after getting lots of pictures of something none of us had truly seen before in person.

Day 2 (Niagara):
We woke up at around 7 and headed to breakfast at the hotel, which also had a breathtaking view of the Niagara. We finished eating and were each given tickets to avoid a 30 minute walk to a certain part of Niagara. We made it and entered the Journey behind the falls. We got to go really close to the falls and had ponchos because the midst from the heavy water would soak all of us. We took many pictures in our bright yellow ponchos 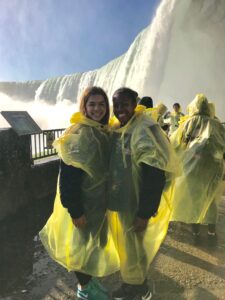 because it was so cool to be in this national phenomenon. After this, we headed out and went to our next activity, Niagara’s Fury. We got to learn about how Niagara came to be over the years and that it has become so large due to erosion over millions of years. After watching the educational video, we walked into this large room that had a screen projected around its circular walls and the floor had drains all over it. Not knowing what we were expecting, suddenly snow started to fall down on us and it became cold. The projection showed thunder and lightening, and before we knew it we had water being squirted at us, while the ground trembled. This whole experience, was a perfect example of Niagara’s Fury. It was such a cool experience that I wanted to go right back in and do it again. The whole idea and concept of this simulation was so neat and something everyone should try. Moving on, we all walked to a green screen where we took this hilarious picture that would be transformed into us stranded in the Niagara’s water. We then took an hour break, where we all ate lunch. Taking the bus was our next activity because then we would take a walk, getting an up close view of the water’s rapids. We all took a lot of pictures here and while I was taking one of Alyssa, a whole wave came up and got her soaked! Luckily, she dried off because the sun came out. The walk came to an end and we then got on a boat, this time with new pink ponchos. This is where we got the best pictures, but the most wet. We all were really wet when getting off the boat, but didn’t even care because it was an awesome experience.
Check out the highlight of this and more from the falls
We shopped for an hour and then headed back to the hotel. We ate at an Italian-American restaurant and they had amazing food. All of the gymnasts hung out in the hotel near the end, and before we knew it we were all fast asleep. The day was so fun, we didn’t even realize we were so tired.

We started our day off with a nice hotel breakfast and a view of Niagara. Once we all finished our delicious little potatoes we walked across a small bridge to get to a trolley. This bridge was very cute because it was covered in love locks all the way across. The trolley took us down to where we would actually go and explore the falls but before that, 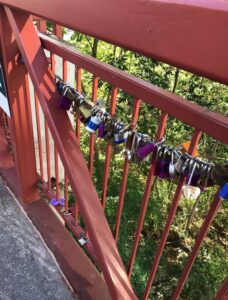 we had to take some pictures in front of the entrance. Our first activity was going behind the falls. We took an elevator down 150ft to these underground tunnels where we saw the water up close. They gave us yellow ponchos to wear down there. Walking through the tunnels felt like I was in a little museum. The walls had all different types of information on Niagara including, the 7 year old kid that accidentally fell in the rapids and survived. You could not see too much behind the waterfall but it was gorgeous from the side deck. Our second activity was Niagara’s fury. This showed us how the waterfall was created through a beaver and an owl in a cartoon. After the video played, we were brought into a room to stand on a platform with water under us. They gave us blue ponchos for a 4D video where it snowed and rained on us. We then ate lunch near the gift shops and took more pictures at the Canada sign. Then we took a bus to the White Water Walk. Here we went 250 ft below ground to walk along the rapids. These are the most dangerous rapids, class 6, which is impossible to raft on. Our last activity was where we originally started. We took the bus back and walked to the Horn Blow. We received red ponchos for this and got on the second story of the boat. We sailed closely to the falls taking beautiful pictures and of course getting drenched. We waved to 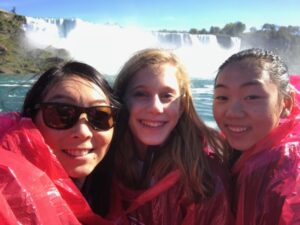 people on Made In the Mist and they waved back. After, we walked to the trolley which brought us back up to the bridge so that we could rest at the hotel. Later that night we ate dinner at My Cousin Vinney’s. Then we winded down in our hotel rooms ending the night.

Getting onto the bus, I already knew this was gonna be a trip of a lifetime. Looking out of the window seeing all the Olympia girls cheering for us was pretty amazing. I love seeing videos of these trips on Region 5 every year, because all the girls hard work is being recognized, and a lot of the other regions don’t get to do this. There’s nothing better than sharing many laughs with such amazing people. After we arrived we got checked into our hotel. We went out to have dinner by the falls. They were truly breathtaking to say the least. Especially all the lights shining. The restaurant was very fancy, and the view was pretty awesome too.  We then went back to our hotel, and settled in for the night.

The next day, we woke up, ate breakfast at the hotel, and got on with our day. The first thing we did was go on our tour beneath the falls. It was very cool but we got soaked! Watching all the water fall down was like nothing I’ve ever seen. But that was only the 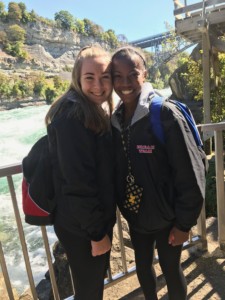 beginning. We then watched a little movie on how the falls came to be. We continued into this room where a video was showed, and as the actions happened in the movie, it happened to us. When they were showing the ice age, “snow” got sprayed onto us. When it started to rain, water poured down. It was super cool! Our next journey was to the White Water Walk. I was very interested in hearing all of the stories of the people trying to tightrope over it. Seeing all the rushing water was very cool. I thought about how awesome It’d be if you had a house nearby, so you could wake up to the sound of rushing water every morning. We finally went to dinner, and just laughed all night.

The bus ride to Montreal was a good one. I love just playing games, watching movies, and making memories with my team. I am forever thankful.