Our next 2017 Level 9 Eastern National Champion is another hometown girl. Sophia Rios of Twistars USA won the Senior 1 All-Around Title, Rios also won it in front of the home crowd in Diamondale, Michigan. Sophia also picked up an individual gold medal on the balance beam taking the Eastern National Beam Title. Let’s get to know Sophia a little bit better and how she feels about her big nationals win and how the competition went for her on home turf. 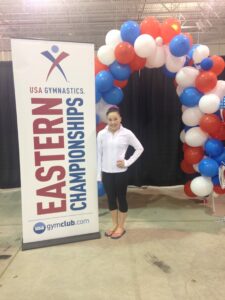 CONGRATULATIONS!!!! How does it feel to be the 2017 National Senior 1 All Around Champion? Winning the national All-Around title feels incredible. After I finished my last event, my coach gave me a giant hug and that was when I knew I had won. I started crying tears of pure happiness and it was one of the greatest feelings I have ever experienced.

Tell us how your meet went today? Walk us through each moment of your day, warm ups, events etc…. Once my teammate Breckin Quoss and I walked into the arena, that’s when it hit me that I was competing against some of the best gymnasts in the nation at one of the biggest competitions I will ever attend. When they allowed all competitors to walk onto the floor, we handed out good luck notes to all our Region 5 teammates. I introduced each myself to each one of them so that we could support each other from the very beginning. At 12:30 open stretch started and we began to do our region 5 warmup. While we were running, I could feel all the adrenaline rushing through my body. After warm up we were led behind the curtain to line up for march in. We had our flashing pink sunglasses that made it even more exciting. As they announced region 5, we walked out through a tunnel of coaches and received high fives from each one of them. That was one of the most exciting parts of the meet. After the march in we headed to bars and put our grips on right away. Bars warm up went very solid for me and I felt very confident and ready to compete. When they announced Region 5, we ran down the mats waving our hands while the crowd cheered. When it was my turn to compete, Brett gave me my pep talk before I competed and I saluted to the judge and began. I finished my routine with a stuck dismount which was very exciting. After my routine, I took off my grips and waited for the rest of my teammates to finish competing. We then rotated to beam and began warmup. My beam warmup was also pretty solid which helped to control lots of the nerves. After I made my routine, I felt a lot of relief because the next two events 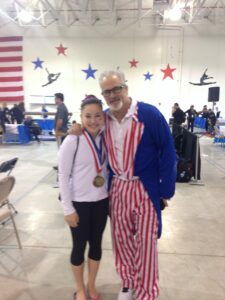 I could just be aggressive on and I’d be good. I always have a lot of time to warm up on floor so I get my passes in, do a few leaps and turns, then stand there and rest my body. Being at my home gym made me feel extra confident because I had all my family and teammates there supporting me. When the crowd cheers you on so much it just makes competitions more fun and exciting. My floor routine was great and after that was when I really realized that I was close to becoming the national champion. My coach John came over and told me that he was going to get all the Twistars in the gym to cheer me on and help lead me to victory since at that point I was tied for first place. Warm up on vault left me feeling a little nervous. It was not how I wanted it to go and I didn’t make any solid vaults. I was last up on vault so I had to wait until all of my teammates competed in order for me to go. Finally, it was my turn. I saluted the judges and I heard the crowd roaring. I must’ve had at least 100 people cheering for me at that moment. I ran down the vault runway as hard as I could and I did one of the best vaults of my life but I knew I wasn’t done. Brett told me to try my hardest to stick it since I had already made my first vault. I saluted, took a deep breath, and ran as hard as I could. I spotted my landing and took a slight foot slide. The crowd screamed and that’s the moment that Brett told me that I won. I started crying tears of joy and so did my coach Angelina. Winning Level 9 Eastern Nationals is a moment I will never forget.

What do you normally do between events to stay focused and ready for the next event? To stay focused in between each event, I continue to shake out my legs to 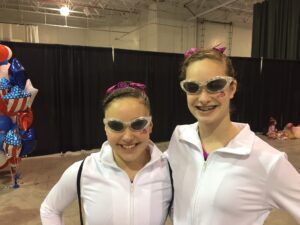 keep my muscles relaxed and warm. I also drink lots of water and cheer on my teammates as much as possible. Along with that, I visualize my routines for the next event to help myself feel more prepared.

Tell us about the atmosphere of the meet compared to regular season meets you have been too. The atmosphere at Level 9 Eastern Nationals was way more exciting. Everyone there was looking for a win. At regular season meets, the energy level isn’t as high and even though they’re not bigger competitions, they almost feel more nerve-racking. At nationals, I could go as hard as I could, knowing that I had nothing to lose.

What is it like being part of Region 5 at Eastern Nationals?  Being a part of Region 5 was so much fun. It is definitely an experience I will never forget. My coach, Brett Wargo, came up with the craziest cheers before each event and they really helped me to have a fun time. We were constantly cheering and smiling and continued to have so much fun throughout the entire competition. 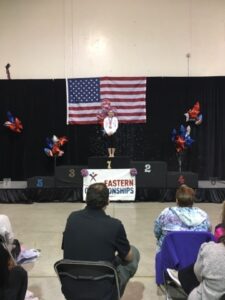 How has your experience been here at Nationals? What have you been doing besides competing? Since I only live 20 minutes away from where the meet was held, I continued to go from school straight to the gym for practice. On Thursday, I picked up my competition gear before the region 5 practice. That was a big moment that I was very excited for. At 3:30 we began warming up for our short practice. I would say my practice on the equipment helped me feel more comfortable on the equipment and ready to compete. After the practice, my teammates and I got ready in the locker room for the 2017 Eastern Nationals Banquet. We headed to Spartan Stadium straight from the practice. When we got there, it was full of gymnasts and we ended up dancing and singing a lot. That was definitely a night to remember. 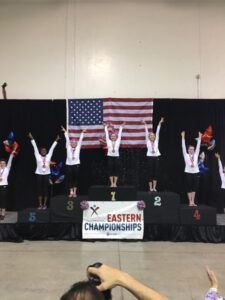 When the meet is over what is or what was the first thing you did to celebrate your win? After the meet, I received lots of hugs and took many pictures. Once we left, I went out to eat with my family. After dinner, we went home and relaxed for the rest of the night.

Anything crazy or funny happen during your meet today? My coach Brett likes to do some crazy cheers before each event. The one before vault was a pretty funny one. He made us all say “fly like the Wright Brothers in 1903”. That was a very exciting and fun part of the day.

How does Region 5 compare to the other Regions out on the competition Floor? What sets Region 5 apart? Region 5 had the most energy and continued to 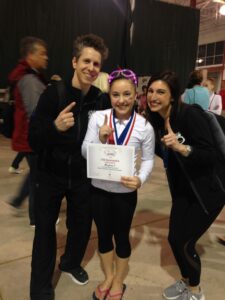 stay positive. We also had some pretty great cheers. The meet felt more like doing great for your region, not for yourself which also made it more fun.

Who inspired you the most today? What did they say to you? How did you get amped up and motivated today? I would say my coach Brett Wargo inspired me the most today. He always knows the perfect things to say to me and helps me to feel more relaxed. Today he told me, “Go as hard as you can and do the best you can. Show them what you’re capable of”. He has truly helped me excel so much in gymnastics and makes practice so much more fun with all his energy and positivity. I am very lucky to have him as my coach.

Congratulations to Sophia Rios on her Two National Championships Titles and to the Twistars coaches and staff.